John Lennon only made it to 40. Would he envy me? 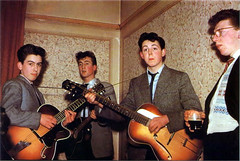 Saturday would have been John Lennon's 70th birthday (his son Sean turned 35 the same day). Lennon was shot dead in New York City a couple of months after his 40th birthday in 1980. As a lifelong Beatles fan, a musician who played a lot of his songs over the past couple of decades, and someone facing my own mortality—and despite all my health problems over the past few days—I've been listening to some of my favourite songs from the band.

As I mentioned recently, that set included Revolver, as well as Rubber Soul, and the album (not EP) version of Magical Mystery Tour. What John Lennon songs do those discs include?

Of that incredible batch of songs, I think only "Run for Your Life" is a weak one (weak for the Beatles, anyway), and "Doctor Robert" is merely rather good. The rest are in varying parts genius, groundbreaking, soporific, anthemic, bizarre, sexy, psychedelic, touching, classic, and inspiring. Surprisingly, in my particular list there are no flat-out rockers like "Twist and Shout" or "Revolution." My favourite? Probably still "Strawberry Fields Forever," followed by "She Said She Said" and "I Am the Walrus." (Hmm, the druggy ones.)

However, in the full listen through, I rediscovered a Beatles favourite of mine that I hadn't heard in years, and didn't realize how much I missed: Paul McCartney's "Got to Get You Into My Life." In it, the Fab Four manage to out-Motown the horns-and-tambourine trademarks of Motown itself, with a song that Marvin Gaye or Stevie Wonder or the Supremes could easily have made a #1 hit. But for the Beatles it was only an album track (until a 1976 re-release that took it to Billboard #7).

Honestly, I think I've lived a better life than many of them did. John Lennon, for all his success, rarely seemed genuinely happy, except perhaps near the end. I've been lucky to grow up my whole life in Vancouver, with good friends and family. I've never really worried about whether I'd have enough to eat, or a place to live, or interesting things to do. Yes, having metastatic cancer sucks big time, for all of us here. It's made the past few years hard, and things would be far, far better without it. I wish I could live longer than I probably will. But I have a wonderful wife and great relationships with my daughters.

Would John Lennon have envied my life? Likely not, but maybe. Maybe.

John Lennon was an incredible artist and no one really knows how happy he was.

True on both counts, but the way he talked and wrote about himself, interacted with others, and behaved indicated he wasn't an especially happy man, until perhaps his "stay-at-home dad" phase in the last five years of his life.