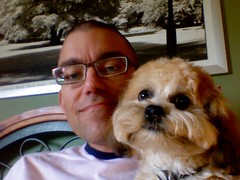 Only once in the past three and a half years, since I found out I had metastatic colorectal cancer that had spread to my lungs, have any of my doctors said anything about how long I might live. At the beginning, my oncologist Dr. Kennecke noted that the median survival for patients with my condition is two years after diagnosis.

That was, I repeat, three and a half years ago. You might think that he predicted I had about two years to live, and was simply (and happily) wrong. But that's not even what he was saying. Because he used the word median, he meant that two years after diagnosis, half of patients with metastatic colon cancer are still alive. Therefore, in 2007, my chances of living more than two years were about 50% (assuming I was a typical patient—more on that below).

And he was right about that, since I'm still here. However, if I'd died within two years instead, he'd still have been right, since I would have been in the other 50%. You can see why doctors like using medians for survival prognoses!

Woe to the prognosticators

According to Slate, doctors are very, very reluctant to make any predictions about how long a specific patient will live, mostly because they're notoriously bad at it, unless the patient is pretty much at death's door—within days or hours of the end. In part that's also because they don't learn how:

[In] major medical textbooks that have been used by medical students (and practicing physicians) for decades [...] the relative percentage of space for each disease entity devoted to prognosis diminished with each subsequent edition, often to a paragraph or less. [Doctors] focus almost exclusively on the ever-expanding sciences of diagnosis and treatment, leaving prognosis almost entirely to the side.

But it's also difficult to predict correctly, especially for someone like me. A typical colon cancer patient is over 50 (maybe decades over), often with a family history of the disease, and perhaps other health problems that go with advancing age. I got the disease in my mid-30s, with no family history of it—and, later testing showed, no known genetic predisposition either—as well a relatively healthy body otherwise, despite having type 1 diabetes since 1991.

So my personal chance of survival two years past diagnosis was probably higher than the median, even if no one knew by how much. Plus my cancer team has felt it worthwhile to try all sorts of semi-experimental treatments, for which more typical patients might not have been eligible. And they've been willing to subject me to fairly high doses of chemotherapy—of which I'll get more on Monday—that I'm guessing might kill someone in more fragile health.

Time is not infinite

However, all that doesn't mean I'm likely to live an 80-year lifespan like your typical newborn Canadian in the 21st century. I've seen the CT scans, and I've watched my cancer progress slowly but relentlessly over the past few years. It's never been in remission, not once.

When my doctors talk to me about my treatments, they never use the word cure anymore. When they see a treatment as successful, that means it has slowed or stopped or maybe slightly reversed the growth of my tumours for a few months, or perhaps a year. Success means buying me time, extra months or perhaps years, but almost certainly not decades—unless, during those extra months, some remarkable new treatment becomes available, and it works for me.

I can hope for that, but I can't expect it. I'm 41 now. My own estimate, not made scientifically, but as an educated guess, is that I'll be pretty lucky if I reach 45. I'll be absolutely astonished if I celebrate my 50th birthday in 2019, and that's what I tell people now. (I was a little bit surprised to reach 40 last year.) The chances are pretty good that—in addition to my wife Air and my daughters and almost all of my friends—my parents, my aunts and uncles, and even our pup Lucy will outlive me. In other words, I'm living in dog years.

Like that initial median estimate, those are all probabilities, not certainties. There's no guarantee that my cancer will kill me within the decade, but being reasonable and realistic means I have to treat that as the most likely result, and live (and plan) accordingly. That's not easy to do, especially for a procrastinator like me, but there it is.

By the way, most of you will have to do the same eventually, but with any luck not until your 70s or 80s. My time is probably briefer than most, and I don't like that. I'm not okay with it. But I can live with it. Woof woof.

every time i read something here about your life with cancer, i'm in awe of the utterly sober and realistic attitude you take to this. thank you for sharing yourself in this way.

and thanks for reminding each one of us that time is NOT infinite. it could hit me any day, any moment, and i think it's a darn good thing to be aware of that.

The good news is that you are living and enjoying those dog years, while so many of us let time slip by, delaying the living until some unspecified time. There are many who would trade dog-years of your passion for your hobbies, talents, interests, your family and your dog, for people-years without.

Keep on keeping on!

While I'm sure it's just a byproduct, I find that I continue to learn quite a bit just from watching your ever evolving position on life, or more specifically the prognosis of how much you have left. Your decision to include the rest of us in this process right here on your website is something that couldn't have existed even a decade ago, at least not with the same reach it can today.

As mentioned by others before me, at least you are living in the moment, making the best of your situation. Thanks for being open enough to share your experiences with us - the any of us who stumble on this site

Chin up champion!. I'm sure you would have low days, but your positive attitude is an inspiration to us all!!.

I really appreciate your writing about your life with cancer - the science & the emotion. Everything I can think of to say sounds ridiculous but anyway, thanks.

Yer pretty awesome to keep blogging about this journey life has you on, mostly because you have such an incredibly grounded and useful perspective on your struggles.

We're lucky to live where we do -- Vancouver's cancer care is pretty phenomenal. I'm sure that's part of your success so far, but your fantastic family (and the ever-present-awesome Lucy) is definitely the other.

And probably the writing helps you, too. I'm sure it helps others, though, and that's what's really important, because so few people truly find strength within them -- the kind of strength you often show in postings.

The trite saying is true, we're all dying, but some have better knowledge of when that might happen.

In some ways, you're lucky to know how valuable every day is. You're unlucky to pay the price you pay for that, but obviously you've found ways to enjoy the value -- whether it's rare great moments with the kids and family, fun with Lucy, whatever -- you show simple enjoyment of life the way most of us would do better to have in our own lives.

So, defy those odds, man. You rock.

I think that your writings should be compulasory reading for medical students. "Living in Dog Years" is excellent - you should really submit it to the British Medical Journal's "Personal View" page that they do each week. Just email the BMJ and give a bit of background - my recommendation, humble as I am, comes from memories of being a junior doctor trying to explain prognosis to many patients with a serious illness and my hearing my more learned seniors (?!?) attempt a toe-curlingly awful 'explanation' to the poor patients....whom I would then spend the evening trying to re-explain the whole shabang.
I keep popping back to "Penmachine" blog to catch up every month or so - it is always so good to read your posts.

I've been following your site off and on for a few years and always enjoy stopping by. I'm here today because of your recent post on Movable Type linked to by John Gruber.

I lost my mother to cancer 10 years ago and naturally took an interest in your writing. I admire your courage and continue to enjoy your blog. I hope your cancer slows to a crawl and that you have many more "dog years" ahead of you. All the best, and thank you for such a great site.

One year ago today, October 3, 2009, I played guitar and drums with my band out in Tsawwassen. I had a feeling (though I wasn't certain) that it might be the last proper gig I would ever play, and now,... Read More