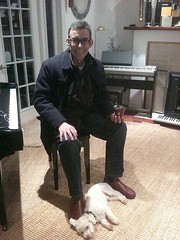 There were lots of odious things about Wallis Simpson, the late Duchess of Windsor, but one of the most odious was her most famous quotation, that you can "never be too rich or too thin." We can argue about being rich, but she was wrong as hell about being thin. This year I've once again become too thin, far too thin.

After my most recent chemo treatment last week, my bathroom scale weighed me in at 163 pounds (about 74 kg). That's not the least I've ever weighed—check me out at a skeletal 145 pounds back in July 2007, after a few weeks in hospital following bowel-cancer surgery, and being unable to eat or even drink for several days at a time—but it is far too little.

For most of my adult life, I've weighed about 200 pounds (90 kg), give or take. I never worried about my weight one way or the other. I made it as high as 215 when I was really trying to pack it on in 2008. My ideal healthy weight is probably around 190, so right now I'm close to 30 pounds too light, and 12 pounds lighter than I was when I went in for that surgery in '07. I'm on the verge of what happened back in the post-hospital days later that month, when I found it hard to recognize the skinny bastard in the mirror.

The problem is threefold: First, I'm finding this current bout of chemotherapy especially brutal. I have very little interest or ability to eat in the three or four days after I get my treatment every two weeks, with nausea, fatigue, and general relentless blecch-ness. What I do eat, I might very well puke up. Second, even after I feel a bit better towards the end of the week, my appetite and the quantity of food I can consume are quite reduced from what used to be pretty normal voracious Derek levels—and I'm still likely to barf up a meal at nearly any time, out of the blue. Finally, I suspect my digestive system is working less efficiently than it used to, so I'm not absorbing nutrients as well as before.

My diabetes, which I've had for almost 20 years, doesn't help, since I can't just suck back banana splits at a whim. I still have to manage my blood glucose and eat carefully when I do feel up to it. I sometimes have to force myself to eat more than I really want—definitely a new experience for me—and that can backfire. Last night I had a few too many delicious perogies with sausage at dinner, and ended up heaving about a third of them back up later in the evening. But earlier in the same afternoon, I had eaten a big truck-stop sandwich with hash browns and a milkshake, and digested it without trouble. I want to eat and food is still delicious, but my body's reaction is hard to predict.

I have a couple of packs of Boost diabetic dietary supplement drinks in the fridge, and those help somewhat, though they're not the tastiest (the strawberry is okay, especially blended with crushed ice), and so are no good during my actual chemo-sick days. Strangely, sometimes I get cravings at the most peculiar times, and am happy to give into them: the very day I had my last chemo treatment a week ago Monday, I wanted a White Spot clubhouse sandwich at dinnertime. My wife Air got me one while out for supper with the kids, and I ate the whole thing. Shockingly, it stayed down. But I hardly ate again for the next two days.

I don't know if this is mostly a consequence of the chemotherapy, or whether it's more that my cancer is now, after four years, directly affecting my ability to eat and metabolize food. Likely it's some of each. Right now, in bed, I can feel the vertebrae at the nape of my neck. I have to buy men's size small T-shirts and sweaters, and even some of those are loose. Most of my jeans would fall down without a belt that's had extra holes punched in it. I'm really noticing our recent Vancouver cold snap, since I lack body-fat insulation, and sitting on hard surfaces can hurt because of my MPAL (Male Pattern Ass Loss).

Can I gain back some weight, or at least stabilize it? I don't know that either. I'll keep trying, one Boost and clubhouse and plate of perogies at a time.

Your words made me even more grateful what I have in the love and health in my life. What I find most incredible with your writing is your children will forever have your words, thoughts and those you have shared with on the Internet and see what a man of character, strength and inspiration their father was to those he never met.

I'm envisioning you fattening up just like a big Christmas turkey. I'm hoping it happens, too. I'm sorry it's being really tough on you. You're an awesome guy & the world is a better place with you in it.

Hey... Just thinking about you. Hoping the Calorie fairy shows up soon.....

I hope that treatment is doing the trick. Do you get a break soon?

My brother has intestinal issues and high fat items are hard to digest. I understand why you want to eat them but they may worsen your condition. Apparently many people find low fat peanut butter is good, high calories and protein, seems to be fairly easy to digest.

Of course if you are allergic, not helpful.

I'm not allergic, fortunately, and my intestinal problems aren't like colitis or IBS: generally I don't find fatty foods to cause bigger problems than others. So when I can keep them down, I digest them okay. But almost four years of chemo and a surgically altered set of bowels do complicate my guts' functionality. Also, since I have lost so much weight, my body simply needs less fuel to operate: that may be one reason for my reduced appetite too.

I sent a message earlier today, and I'm not sure that you got it - I forgot to type Vancouver before I pressed submit. We don't know each other, but I have been following your blog for a while now. I have a son who was treated for cancer from 12 mos through 4 years, and he was not verbal enough to tell me what he was going through at that time. I really appreciate your blog because it gives me a glimpse of what my son went through.

This post reminded me of a side-effect of chemo that my son experienced, which is zinc deficiency. At 2.5 years old, he weighed only 18 lbs, had a very distended belly, and was experiencing cardiac symptoms. All of the vomiting and diarrhea caused him to become zinc deficient, causing malabsorption of his food, which in turn caused more vomiting and diarrhea. It was a very vicious cycle.

I am telling you this because I am hoping that someone is keeping a good eye on your zinc levels. In my son's case, it was not the oncologist, cardiologist or the GI doctor who diagnosed the zinc deficiency - it was my mother - a nurse who was looking at all the symptoms as a system. As wonderful as the specialists were, they were each so focused on the symptom pertaining to their own field that nobody put it all together. After my son's diagnosis of zinc deficiency, we suggested to another family in the clinic that they have their daughter's zinc level tested. She was experiencing similar symptoms, but to a much lesser degree (no cardiac symptoms, just vomiting and diarrhea). It turned out that she was also zinc deficient, and after a two week course of supplement she was able to start putting on weight again. I do appreciate that you are having issues with appetite at the moment which are affecting your weight, but I think zinc levels are important to keep an eye on.

Sarah, that's an interesting point, and I'll mention it at my next doctor visit. On the other hand, I don't think there's much mystery behind my weight loss, and indeed I do put on weight between chemo treatments—just not enough recently to make up what I lose. That's why it's happened gradually over months rather than catastrophically over weeks. But it's something to keep in mind, thanks.

I am no expert in these things. But I am experiencing the same things: weight loss and satiety with my leukemia. It's not that I am not hungry. I start to eat with the greatest of intentions of finishing, but find I get that full feeling way too quickly. So for example, if I finish a half sandwich I feel full, half a cup of soup, same deal.

The zinc deficiency Sarah has mentioned is interesting and I should look into that too.

Ah, the Boost diet, yup, been on that too. I found if I put a can in the freezer for a short while, it eliminated that tinny taste. Like you, I don't know if it is a metabolism issue or what. I cannot blame it on chemo as that isn't available to me now.

I was always a little underweight anyway, so you can imagine how happy my docs are now as they watch me lose weight.

So I will send you food craving vibes and encouragement to eat when you can. My docs have recommended heavy malt beers which sometimes I can tolerate.

As always, wishing you the best. Reading your blog always inspires and helps me.

If a doctor's going to recommend beer, I'll go for that!

I don't think I can add anything to the great supportive comments that everyone has posted, other than I'm sending you my love (and if your doctor recommends you beer, send me a DM and I'll be more than happy to swing by with a few cases of beer. You know, just for good measure :))