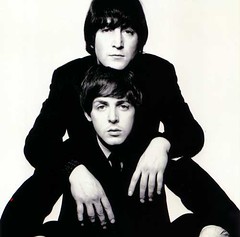 Whenever I talk to one of my therapists or counsellors about my cancer and impending death, I mention how I can't predict what will make me cry, though it happens most often when I'm alone. I don't cry as regularly as you might expect, maybe because I've been thinking about it all for several years now. And the things that set me off are usually unpredictable and weird.

Like Paul McCartney on Saturday Night Live last week. At first, when he played slightly-wobbly versions of "Jet" and "Band on the Run," I wondered why he was the musical guest at the moment: most guests only play two songs, he wasn't plugging a new album, and if he were promoting the Beatles on iTunes, I figured, you know, he'd do some Beatles tunes.

But then he turned up for a third performance, and from the first quiet acoustic guitar chords, I knew why he was there on the stage in New York City, and my eyes watered up. The song was "A Day in the Life," and he was playing it 30 years to the week after its primary composer, his long-dead childhood friend John Lennon, was shot not far away. Those two were the greatest songwriting team of the 20th century, the song one of their most spectacular collaborations (John wrote the beginning and the end, Paul the middle), from Sgt. Pepper, their most groundbreaking album.

When McCartney and his band turned it into an audience-singalong medley with one of Lennon's most lasting anthems, "Give Peace a Chance," I completely lost it, bawling (once again) by myself on the couch. Now, he said nothing about Lennon, neither before nor after the performance, nor later when, over the end credits, he performed a fourth number, his own Beatles classic "Get Back." But those few minutes of McCartney playing Lennon were the best tribute to the 30th anniversary of John's death that I saw.

On the actual anniversary, December 8, I was interviewed briefly by reporter Ian Hanomansing on the Canadian Broadcasting Corporation's "The National" TV news, about Lennon's day-to-day influence on my life as a musician, listener—and father of Beatles-fan daughters who were born decades after the band broke up. (I was less than a year old then myself, and 11 when Lennon died.)

In part of the interview that didn't make it to air, I told Ian that from what I knew, John Lennon was a complicated character, not a simple emblem of peace and love, but an acerbic personality whose personal relationships were often fraught, whose life was often not happy, and who frequently contradicted himself, consciously or unconsciously. No doubt Paul McCartney knew that better than anyone, but last weekend, he didn't try to sum it up by talking about John Lennon. He let the man's music speak instead, and that's as classy a tribute as you can get.

Once I started crying after hearing All My Loving on the radio. I was travelling on the bus with one of those old walkmans a couple of years ago and I considered myself being over the recent break - up I had been through - well, the random breakdown after listening to All My Loving proved me wrong instatnly. Beatles seem to be with us for most of the time...

Turns out he does have a remastered version of Band on the Run to promote, and was playing a concert in NYC too, but still, nice job, Sir Paul. (He was definitely in better voice for the two Beatles songs on SNL.)

Hi Derek !
So the beatles were my favorite group as I grew up at the age of about 12, although they were already split 13 years ago. At that time a song that can make me cry (only when i am alone) is "With a Little Help from My Friends" from Sgt. Peppers album. I don´t know why but its a wonderful tune sung by Ringo Starr with only 6 notes in the melody !
I think i will rip my old Vinyls to mp3 for me and my kids.
Thanks for the new look at the fab four !

I think the Beatles are kind of overrated... I would argue that Benny Andersson and Björn Ulvaeus were the best song-writing duo of the 20th century! :)

You'd be in the minority in that opinion. But I would agree that Björn and Benny had much tighter trousers!