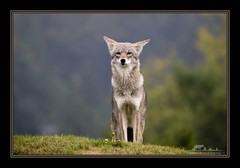 There's no shortage of coyotes in Greater Vancouver. In our Burnaby neighbourhood, I've seen them regularly for years: they live and hunt in nearby Deer Lake and Burnaby Lake parks, and when I used to come home from band gigs late at night I'd regularly see small packs of them on suburban streets.

When I was a child, my knowledge of coyotes came mostly from Road Runner cartoons, but they have extended their range in North America during the past few decades. Like rats, crows, seagulls, raccoons, and a few other species, they seem to thrive near human habitation, with urban dwellers perhaps even living longer than their rural counterparts. They're common enough now that my kids nicknamed our local park/sledding hill "the Coyote Park" because of warning signs the city posted there.

However, this morning, my mom (who lives next door) spotted a mangy, rough-looking coyote darting across our street in broad daylight. That's unusual and a cause for concern: in urban areas, they are usually nocturnal. But a hungry and ill coyote is more likely to attack pets, small children, or even adult humans.

Our little dog, Lucy, would obviously be a prime target. So from now on this season, we'll have to make sure we don't let her out of the house, even in the yard, by herself—which is too bad, since she does like to run around out there, inside the fence, without us. But I don't think our fence would be much of an impediment to a determined coyote.

The sighting has dredged up primeval worries in me. I feel that I must now bring a big stick, a cane, or another weapon when I walk the dog. No doubt people have felt that need for as long as we've been people.

oh dear jesus. my parents lived in san diego. a coyote ate my moms little ktty cat. his name was kimo - aka chemo? he was her partner while she was home getting her treatments for lung ca. in any event - coyotes are evil and hungry! well, probably not evil. still, no unchaparoned outings for miss lucy. #godforbid

Evil? No. If Lucy were bigger and hungrier than a coyote, I'm sure she'd have no qualms about eating one of them either.