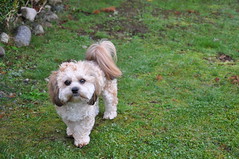 We've had lots of occasions this year in our household. Our younger daughter L turned 10, and her sister Marina 12, her last birthday before becoming a teenager. My wife and I had our 15th wedding anniversary (though I was out of town for the actual day). My parents had their 45th.

We saw the 25th anniversary of the Air India bombing, and the 30th since the big eruption of Mount St. Helens. I marked 40 years since Jimi Hendrix died, and what would have been John Lennon's 70th birthday (it will be 30 years since his death next month), 10 years since the release of Mac OS X and 25 since the appearance of the original Super Mario Bros. game. I passed three years since my cancer diagnosis, and this blog even turned 10 years old.

Today is another significant event at our house. A year ago, we bought a puppy and brought her home in our station wagon. She was already almost three months old, and we named her Lucy—my wife Air's idea, since her first dog as a child also had that name. Despite some extremely tiring early days, where I had to take her outside every couple of hours before she was housetrained, it has been wonderful to have her here. She is warm, and most often a calming and gentle presence in the house.

When I'm alone here with her, as I often am when my wife's at work and the kids are at school, the house is a more vibrant and alive place. We've never regretted bringing her home, and we're glad we brought Lucy into our family.

Yeah, it's amazing how much they change daily life. So much more than say, a cat. (we have 2 cats, so I'm not badmouthing the cats!) Louise arrived at our house already a few years old, being a rescue, but many times now we have looked back at how much she has changed our home for the better. So what you say rings very true to me as well.

Our 2 dogs spend most of the day sleeping. But somehow on the rare days when they're at the groomer's and I'm alone (with 3 cats) the house seems very quiet and empty. Even when they don't 'do' much they're still great company.

I get a lot of pleasure from looking up from my work to see them sprawled out, tummy in the air, relaxed and asleep.

It sounds as though Lucy has brought a lot into your family. Happy anniversary. :-)

Three cheers for Lucy and the joy she brings you all -- all of us, actually, since even her photos make me smile.

As for our little Dr. White (Phaedra), this huge healing force will be celebrating her 2nd birthday in 3 days. Our girls have already saved up and bought her a brand new birthday gift.

Your Little Lucy has in always been able to cheer me up when I am down. She is a great pooch and thank you for sharing her with me when I visit.