Why the Millennium Falcon is the coolest 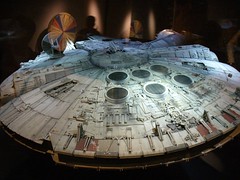 Earlier this month I mentioned my childhood obsession with Star Wars (an epidemic among us pre-teens at the turn of the '80s), and the fabulous Millennium Falcon book one of my daughters bought me for Christmas this year. Flipping through that book reminded me that the Falcon remains my favourite fictional spaceship of all time.

A big part of that is how real the Star Wars movies made it. Not only did it fly through space in special effects shots, but there was a full-size version built for the movie soundstages, plus the interior and cockpit sets. Movie viewers got a sense of the size and arrangement of the ship. One of the key innovations in Star Wars was also how lived-in the worlds and the hardware looked, none more so than the Falcon: there are blast marks and missing panels on the outside, and scuffs and dirt around the interior. The shape is also asymmetrical and strange, yet somehow right, both messily off-kilter and sleek at the same time.

Perhaps most importantly, the Falcon is just the right size and design for an imaginative kid to dream about. Star Trek's USS Enterprise is fantastic too, but it's huge, like the Navy ships it's named after—or an ocean liner. Big, quiet, efficient, run by a crew of hundreds. (Same problem with a Star Destroyer.) Smaller vessels like the X-wing fighter or Cylon raider are too cramped: just a cockpit and nowhere else for a pilot to go.

But the Falcon is like a motor home crossed with a Ferrari. It's beat up, but hot-rodded too. There's room inside to sit at the controls, and sleep, and eat, and stash cargo—it's a working ship with the proper facilities. (The movies never show a bathroom, but you know it's there. Probably a beer fridge too.) There's space to hang out with your friends, and space to be alone. My nerdy young self could imagine a long cross-Galaxy hyperspace voyage, like a desert road trip here on Earth. With just Han Solo and Chewbacca on board, Chewie would take his turn at the controls, and maybe I—ahem, I mean Han—would walk back into the hull, climb up the ladder to one of the gun turrets, sit in the perpendicular gravity of the gunner's chair, and watch the stars whiz by overhead.

I had my own version of the Millennium Falcon in our basement, which I wrote about a year ago. It's a tribute to that ship's appeal that we could reproduce it satisfactorily with a ping pong table and some big cardboard boxes.

The Eagle Transporter from Space: 1999 is a close second on my list of favourite spacecraft for similar reasons: it's a sort of spacefaring Winnebago too, a no-nonsense, utilitarian ship. The Eagle is not quite as cool as the Falcon, though, because it's just as much a lumpy utility vehicle as it looks. There were dozens of transporters at Moonbase Alpha, but only one Falcon anywhere in the Galactic Empire. And there are no hot-rod secrets under the Eagle's hood—plus no hyperdrive or giant furry co-pilot either, of course.

By the way, I had (and still have) several Falcon toys and models, as well as a single die-cast Dinky toy Eagle (the lower left one, which I played with so much that the paint was chipped and the utility module wouldn't stay clipped in anymore). In elementary school, my friend Stuart (or was it Stewart?) had an absolutely AMAZING Eagle Mattel toy that must have been almost a metre long, with panels to let you access the cockpit and interior. I was majorly jealous, even though I had a Falcon toy almost as big.

Motorhome crossed with a Ferrari - that's great. Reminded me of Spaceballs. :)

Thanks for this - as a Trekkie who found Star Wars later in life, I always wondered about the fascination...

When Star Wars came out in '77 we were just past the peak of Big Detroit hot rods such as the first Camaros, Trans Ams, Challengers, etc. Some of these were sparkly garage queens, but some of them were daily drivers, and many of them were overbuilt hot rods by twentysomething slightly-rogue guys who had a love/hate relationship with girls - not unlike Han Solo himself. Coincidence? I think not.

(I was working as a commercial diver and the MF reminded me not only of some of these guys and cars, but also of some of the guys and their boats - work boats with big engines but a fair amount of rust and grime too.)

Derek - we must be cut from the same kid-sci-fi cloth!

The Millenium Falcon was my absolute favourite spaceship as a kid - you've pretty well summed up all the reasons perfectly. That chess-like game, those cannons that Luke and Han fight of TIE fighters in, all the secret compartments ... so cool.

After (only semi-seriously) whining about being neglected as a kid and not getting the ship as a toy when I was young, Catherine and the kids got me one (which the boys have "borrowed" ... indefinitely).

I also had the Eagle (the green one) as well! (Wasn't there a ship in the series called the "Falcon") I had a model of Moonbase Alpha that I played with until it broke beyond repair. Where is the remake of that series?

I stand corrected - it wasn't the Falcon, but the ""Hawk".

I think I've met my geek quota for the day.

That's a great way to describe how the Millennium Falcon "felt". Joss Whedon's "Serenity" ship from Firefly had the same "this is a real place" feel: it wasn't clean, it was clearly lived in, and had one of the best galleys we've ever seen on a spaceship. Whenever humanity achieves casual intergalactic space flight, those ships are going to feel just like your car does now: some people's will be pristine and sterile, others' will be dirty with "personality". The ones with personality are the memorable ones.

I have a second-hand story that testifies to the magic of the physical manifestation of the Millennium Falcon.

A friend of a friend was a tinkerer, and a model builder. He also was a biker. Putting these all together, and neglecting safety entirely, he adapted his motorcycle helmet to look like he'd crashed into a small Millennium Falcon, complete with dents and burn marks etc.

He was tootling around Vancouver on his bike with his no-longer-safe helmet when somebody in a car flagged him down and asked him to be a production designer on some sci-fi movie filmed in Vancouver. Dude hasn't looked back since.

It's not just actors who get discovered on the street.

Dan's boat analogy might be even better than my motor home comparison. You could also liken it to a souped-up old bush plane.