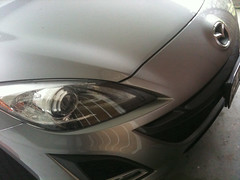 It's now been more than six months since my wife Air replaced our Toyota Echo with a much jazzier Mazda3 GT sedan. As it should be, the Mazda is a better car in every respect. (The best thing? Heated seats.)

Back in the '70s, the first Mazda I remember noticing was the GLC, known as the Familia in most of the world. The Mazda3 is a direct descendant of the GLC—through other names such as 323 and Protegé. "GLC" itself supposedly stood for "Great Little Car," and the Mazda3 remains that.

The driving position in the Mazda is much sportier than in any of the other cars we looked at, such as the Toyota Corolla and Honda Civic. For similar sporty reasons, it's also more difficult to see out the back and side windows than from our Ford Focus station wagon—it's like a cockpit in the Mazda, especially with the aggressive red-and-blue lighting of the instruments.

I also have yet to find anyone else who owns a Mazda3—which turns out to be many people we know—who dislikes it at all. It's not just a great little car, it's a car that seems to inspire loyalty. Our Toyota never really did that, even though we bought it on my birthday in 2004. True, it was a bottom-of-the-line model, but the Echo was simply a car, nothing more.

The Mazda has more personality than that. It's not a true sports car, but it's as close as anything we've ever owned. And it's fun getting it up to speed on a winding road (something we don't get a chance to do very often). But our Echo, the Focus, the Ford Escorts we owned before those, and my old AMC Hornet, Ford Fairmont, and Mercury station wagons never even prompted us to try.

One of the podcasts I listen to regularly has been sponsored by a car company pimping their new 'crossover', which features both heated and cooled seats and, get this, driver's side back massage. Personally, I think we ought to perfect the self-driving car first, and then focus on more seat features.

I think I trust seat-heating and -cooling technology more than automatic driving at this point.

I had a MAZDA 323 hatchback for over a decade. I cried when I drove it to the scrap yard, I loved it so much. I felt like it was part of me.