A little less each day 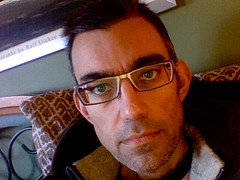 Dying from cancer means being a little bit less alive every day. That sounds weird, and it is. But I look back six months, for example, when I was still tromping around the mountains up in Whistler, driving down to Seattle, and taking hundreds of photos of my cousin's wedding—and I couldn't do any of those things now. Yet there's no obvious mark of when each one became out of the question.

I suspect a lot of "last things" are like that: they pass by as every previous one has done, and you don't realize until later that you'll never do them again. I knew long ago that I'd likely never go scuba diving or skiing again, but that was still well after my last dive and ski trip. When I didn't bring my bicycle out of storage last summer, it occurred to me that I'd probably taken my last ride the summer before. Sometimes it is obvious at the time too: it was clear when we visited Disneyland recently that I was unlikely to see California again afterwards.

Beyond that, I've found myself less interested in some of my main hobbies. I'm winding down my involvement with the Inside Home Recording podcast, in part because I'm too ill to keep hosting, but also because recording music at home doesn't interest me much anymore. I haven't released a new tune online in almost two years, in fact. (I think what I really enjoy is playing music live, and I've been unable to perform a full gig since late 2009.) And after accumulating a bunch of cameras and lenses, I'm not taking very many photographs these days either.

It's not that I'm giving up on all the things I like, but that I have to admit when they're no longer enjoyable or physically possible. Sometimes, for instance, my big SLR camera really does feel too heavy to lug around, which it never used to. Still, I never seem to tire of writing, whether on this blog or in little bursts on Twitter and Facebook, or in comments on other people's sites.

Writing is the creative act I've practiced the longest, in fact. I remember enjoying it very early in elementary school. It's why I started this website back in 1997, to promote my nascent freelance writing and editing business. It's what's made me most of my living for my entire adult life.

So I keep doing what I can do, whittling down to the core of both what I like and what I'm still capable of. Facing my own illness and death is clarifying. The less possible or important things burn off, or I let them drift away. What's left is as much of me as I can keep going. A little less, but still me.

Hey Derek... Thinking of you.

I'd like to thank you for your honest and poignant posts. I appreciate how you openly share your experiences with cancer, thoughts on life and death, interests, and family. Reading your posts is sobering and causes me to pause to consider and reflect. We seem to know a lot of common people in the cyberverse and I have noticed what a positive effect you have had on their lives. I'm not sure if we will ever meet IRL, but I wanted to take the time to express my thanks for allowing me to get to know you a little bit through various social mediums. And everytime I type only one space after a period, I'll remember you!

Maybe, health permitting, you can get on stage for a song one more time at your party next week. xo

reading your posts makes me feel like I know you - although we have not met- i look forward to them and to see what you have to say- I also am drawn to your story- I need to know what is happening with you and somehow reading makes me feel like I am supporting your through your journey- thank you for that- it will be your legacy - and like Karen I too now pause before i type the "." making sure that there are NOT two spaces.....see you have legacy already!

Growing old is also about being a little less alive everyday in some ways (just at a much, much slower pace). I still ski, and rock-climb, but I realized the other day that the thought of doing a cartwheel (let alone a back handspring) kind of freaks me out. Not just that I don't think I could do either anymore, but that it feels like trying would break me - and I probably didn't realize when I did my last handspring that it would be my last.

I'm so sorry you're going through this in such an accelerated fashion, but I'm glad you're still able to write and get pleasure from it. I look forward to reading this blog and seeing your comments on Facebook - it's the main reason I log in to the latter these days.

It's a great legacy. And wonderful that you can do it and enjoy it.

Thinking of you, man. Looking forward to seeing you next week.
R

Thank you for sharing these thoughts with us.

Ah Sylvia, I've never been able to perform a handspring or a cartwheel in my life.

Derek, reading your posts drive me crazy. I thought id accepted the fact that in life, there are things we absolutely can not change. But every time I read posts like these I get so frustrated with that concept. Do you want to go ahead and get it over with? Sometimes it seems like that, but I hope the answer to that is no. I want you to magically will the cancer away, and simply refuse to die. No more good people like you are allowed to die so early.

I've come to accept that I'm going to die, though I have no wish to accelerate the process. But willpower doesn't go very far in the face of stage 4 cancer. After all, there is no stage 5. And nothing in the nature of the universe requires it not to be frustrating. Can that be even harder to accept? Yes, but so it is.

"Nothing in the nature of the universe requires it not to be frustrating." Wise words. Has accepting all of this made it less frustrating?

What a poignant post today, Derek. I check often to see if you've written and am glad when you do. Don't really know how I first came upon your website but I am moved by your openness. The beauty of you sharing your story here is that there are complete strangers like myself, living in New York City, who feel genuine concern for your well being. Thank you for sharing.

I never know what to write that would be meaningful in any way, but I admire your courage and willpower. I wish I could meet you, but as others said already, I feel that I got to know you through the blog. I'm glad that you still enjoy writing.

Derek: I'm glad you have shared your life with me and I am a better man for it. Thank you for facing the future with a clarity and bravery I've seen few exhibit. My wife and I are sending good thoughts to you and I hope every moment you have left is a special one. I am not looking forward to your last blog post, but your next one. Anyway, thanks!

I wish I had something profound to add but I don't. At 52 I have like Sylvia become aware of my mortality albeit at the "healthy" progression. I am aware the there are some things I have already let go of, cartwheels for instance but they were never my strength. While I love hiking, running, swimming and being physical in nature it is keeping the mind occupied that gives me the will to live. I am so glad you still enjoy the writing. I think it will be that way for me too. Not writing specifically but communicating through word and image. I have said I could learn to live without my legs or hearing but please spare me my vision and hands. To be unable to see and make art would be the end of me. May your passion for words stay with you to the end. You are an inspiration.

I keep meaning to comment on this post but haven't yet. I like this post. It's one of my favourite posts you've written, in fact. I'm not entirely sure why though. Your words seem to convey a sense of contentment at "whittling" down to your core. That last paragraph is simply awesome...and so important. So yeah, I like this, thanks for sharing :)

Here is a little thing that made me smile. A family friend of ours, an anthropology prof (I mention that because he was a quiet, intellectual sort), was struggling after having had a brain tumour. Apparently he told his wife and grown daughters "I will do the cha-cha again."

I doubt he could do it "again" because he'd probably never done it in the first place. That was the dark joke of it. He is no longer with us.

Hi Derek,
We only just met, over on Darren Barefoot's blog. I am glad that you continue to write and share yourself. Have a great time at your party. What's the deal with the periods?
Joe

And as far as you know how your writing has impacted people's lives, there are lots of lives that you have impacted with your words that you don't know.

My girlfriend started reading your blog because she was just browsing one day and happened to click the link to your blog from my blog.

I asked her awhile ago if she ever commented on your blog to tell you this and I think she was was too shy to say anything. But she was very grateful for your words. Her son has been cancer-free for almost 3 years now, but she continues to read your blog.

We can tell that your words are part of your core as your continue to write. Thanks you from the bottom of my heart.

Joe, you can read this post for the lowdown.

Hey Derek, total random stranger here, found you via Miss604's tweet the other day. Lost numerous family members to the dreaded C so I can relate in many ways to what your friends and family must be feeling.

Have you ever seen/heard the Last Lecture by Dr. Randy Pausch? He was a professor who also had cancer, and held one final lecture for his students, friends and family. It's pretty touching how he handled everything near the end. Try and get your hands on the book!

My wife went to see his wife Jai speak in Virginia not long after he died, so not only do I know about it, one of us has met a member of his family. It's a pity he had an even shorter time after diagnosis than I have. That was also true of Farrah Fawcett, Patrick Swayze, and other high-profile cases. Goes to show that no matter your attitude, wealth, or resources, cancer may still get you. Fortunately, many others also survive, like my dad, aunt, and uncle.