Remember the end of The Empire Strikes Back, where Leia and Luke, convalescing from surgery to replace his severed hand, gaze out of the window of a Rebel spaceship at the departing Millennium Falcon, with the Galaxy (the far, far away one) spinning slowly in the background? It looked something like this: 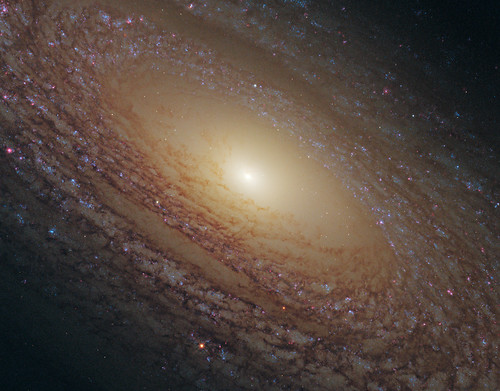 That's a real galaxy, though, called NGC 2841, about 45 million light years away from our own. And neither it nor its Star Wars companion would look anything like that if we were seeing them with our own eyes.

First of all, forget the spinning: it takes our solar system about 225 million years to make one rotation around the core of the Milky Way, so even if you were able to see the whole disk, it would take many human lifetimes to perceive any motion at all. Put another way, the last time we were at this spot in our rotation, Earth was in the middle of the Triassic period, the time of the earliest dinosaurs.

Maybe more importantly, I don't think we could see a galaxy in all its beauty that way at all, because it would probably be too dim for our eyes. Consider that all photos of other galaxies require pretty long exposures, even for sensitive equipment. The Andromeda Galaxy, which you can see in a dark sky with your naked eye as a faint smudge, doesn't show its full shape in a telescope until you collect light for at least a few minutes.

Consider the fact that we're right inside a galaxy, and for most of us living in cities, the Milky Way, which is the view through the thickness of our closest spiral arm, is entirely washed out by light pollution. I don't think my daughters have ever seen it, in fact. You need a pretty dark sky, preferably on a moonless night, to see it properly.

If you were far enough away from a galaxy to see the whole thing, it would be even dimmer, so no matter how dark the sky, to your naked eye it would be much more a large, galaxy-shaped smudge of light (an impressive smudge indeed, but still smudgy) than the crisp, defined, and detailed colourful disks we see in photos. You might be able to determine its shape, and see the core, but it wouldn't be what Luke, Leia, R2-D2, and C-3PO were gazing at.

People are sometimes disappointed when they look through a telescope at celestial objects. Jupiter, Saturn, the Moon, and the Sun are certainly impressive, but nebulae lack the fantastic colours and flaming tendrils we've come to expect after decades of Hubble Space Telescope images. But those pictures are long exposures, often with artificial colours displaying wavelengths humans can't even see. While those images are real, they're not what our eyes see when we look at the light directly.

Still, think about how amazing it is to do anyway: away from city lights, on a dark clear night, preferably at high altitude, you can peer up near the constellations Pegasus and Casseopeia to find the Andromeda Galaxy, no binoculars or telescope necessary (though they'll make it yet a better experience). When you see it, you know that the light hitting your eyes started its journey two million years ago, before modern humans evolved.

If it wasn't for the clouds tonight (and how about that thunder around 9pm???) I wonder if we'd be able to see the aurora all the way down here in Vancouver tonight due to the massive solar storm that'sbombarding us right now?

A few months back there was a posting on reddit of a picture of a night sky, complete with milky way streak. In the comments for the posting a whole bunch of people wrote "faked!" or "photoshopped!" because they didn't believe that it was possible to see all that with the naked eye.

It struck me as sad that there were people who'd never seen the night sky free of light pollution. I grew up in Vancouver, but I've seen the milky way on camping trips.

Makes you feel awfully small and insignificant, but it's still pretty trippy.

I enjoy peeking through the light pollution. This photo is a stack of several images, taken from my horribly light polluted backyard:

Thanks to a Deep Sky filter by Lumicon, I can sort'a "EQ out" the bad parts of the light pollution. Amazing, huh?

My dad's been a keen astronomer ever since he was a kid, and he's been involved with the Royal Astronomical Society of Canada in various executive positions for decades (in the third photo on this page, he's the guy with the white hair and slacks in the middle, showing off his orange Celestron telescope). So I've had lots of chances to see proper dark skies over the years. I think the most spectacular night sky I ever witnessed was about 30 years ago, at Crater Lake in southern Oregon, which is far from any city and 6000 feet above sea level. The Milky Way is quite a thing to witness, but it's also amazing simply to see so many more stars from horizon to horizon.

I happened to see the Milky Way for the first time this past October when I was visiting a friend in Nashville of all places. At first I couldn't believe what I was seeing. I thought it just was a strange cloud or some other atmospheric phenomenon, but then I verified it with the StarWalk app on my iPhone.

On a semi-unrelated note, in case you've never seen this before:

"Time lapse video of night sky as it passes over the 2009 Texas Star Party in Fort Davis, Texas. The galactic core of Milky Way is brightly displayed. Images taken with 15mm fisheye lens."