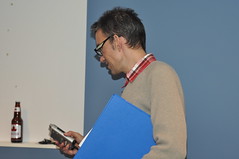 Back in November, I complained that I was too thin, after the punishments of my last two types of chemotherapy reduced me to 163 lbs (74 kg). But in the weeks after that, despite stopping chemo altogether, my weight continued to drop. It has been as low as 149 lbs (68 kg), only a few pounds more than my all-time adult low of about 145 after surgery back in 2007.

I've plumped up (ha!) slightly since then, but even today I'm only 155 lbs (70 kg), despite trying to gain weight since December, and I don't seem to be packing on anything more. I can eat, but not as much as I used to, and I continue to have regular diarrhea and occasional vomiting. My digestive system is simply less efficient than it should be. It's harder to enjoy food than it used to be, though I'm glad I still do. Many of my clothes don't fit properly. I've had to notch in some of my belts. In the mirror, I can count my ribs and some of the vertebrae in my spine, and see too much of my cheekbones and jawline. I'm frequently cold, which was rare before—spring and summer will be a blessing. Sitting on hard surfaces is uncomfortable.

These are no longer chemo side effects, simply a few of the many symptoms of my growing cancer. Perhaps the tumours near my spine are interfering with the nerves that control peristalsis in my gut. Or maybe they are more directly obstructing how food passes through my digestive tract (though I've had genuine blockages before, and I'd know if that were happening). Or maybe it's something else.

Whatever's going on, it makes me weak and tired too. Late last year I finally relented and acquired myself a disabled parking tag. While I don't currently use a cane or wheelchair, I've often needed it. I'll drive to my pharmacy, or the mall, or some other location, and then sometimes sit in the car gathering the strength to cross the parking lot to my destination. On those occasions, if it were busy and I had to park far away, I'd likely give up.

When I have a bad day, I never know whether the next one will be better or whether it's just a new point on the way downhill. Similarly, while my weight seems stable now, it's also possible that I could be wasting away quite slowly. On average, I'm certainly less capable than I was a month ago, and a month before that. It's simply a pattern I face now.

I hope this doesn't fall into the realm of "irritating advice" but I thought it worth mentioning what finally helped me gain a tiny bit of weight back - copious amounts of coconut oil. It's pretty expensive, but seems not to irritate my sensitive guts. I usually mix it into soy yogurt or cereal, and even just mix cinnamon into it sometimes and eat it straight with a spoon if I haven't been able to get sufficient calories into me when I'm not feeling well.

The skinny butt on hard surface thing totally sucks, we should make you a really stylin' butt-cushion or something.

I just love your writing and how you share what you are going through. Thank you. xo

We have plenty of cushions here. I just notice it if I encounter a hard wooden chair or a concrete bench. The coconut oil is an interesting idea too.

Just wanted to check in and let you know that I'm following your story. Spring is nearly just around the corner. -Tonya

If you try the coconut oil, make sure to read the labels, some brands have almost twice the fat per tbsp as others (usually the more expensive ones).

Hi Derek, I'm one of your twitter followers. I also know your friend @beth77.
I started following your tweets after I moved to Vancouver temporarily and I was on chemo and a clinical trial for triple negative breast cancer. We may have passed in the halls of BCCA, (I was the bald lady). I'm now in remission, back to Whitehorse, back to work, working on the new normal.
I've had to consider the "what if's" several times with odd blood work, CTs, xrays, calcified bits here & there, etc, etc.
The answer of course as you and your family are living proof is to take care of the business of cancer and yourself and then Live.
Thanks Derek, you and your wife both inspire me
Sincere regards, Anne
Also, for the boney areas such as your sit bones, sacrum/coccyx, hip bones, you might want to try duoderm thick. As a nurse, I've used it as a "pre-emptive strike". It helps to distribute the pressure like a layer of fat.

Just thinking about you and wanted to check in...sorry to read about the rough times...I know there are probably many more than you even share...thinking of you.. : )