The modernization of Japan saved hundreds of thousands of lives today 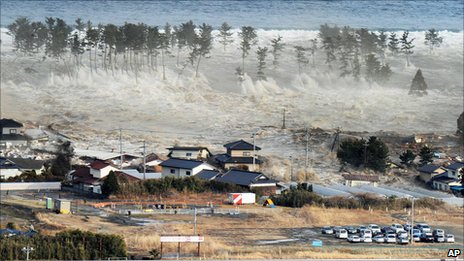 Right after the Indian Ocean earthquake and tsunami at the end of 2004, I wrote what turned into a long article about it, and about tsunamis more generally. People found the piece useful, so following today's devastating 8.9-magnitude quake and tsunamis in Japan, I thought I'd point it out again, particularly my general introduction and the Q&A section later on.

Today's situation is different, of course. Damaging tsunamis seem to have been largely restricted to the coastline of Japan itself; Hawaii and the rest of us around the Pacific Rim saw comparatively minimal effects (the wide-open coasts of southern Oregon and northern California seemed to get the worst of it), if any. And Japan has probably the world's most sophisticated earthquake and tsunami response system, as well as the most stringent seismic building codes. Many hundreds (perhaps thousands) of people died in Japan today, and there will be vast costs in rebuilding—but in 2004 the death toll around the Indian Ocean was over 230,000. Last year's Haiti quake, of far lower magnitude, killed hundreds of thousands too.

As a measure of how much modernization has changed things, as recently as 1923 over 100,000 died in the Kanto quake, which was not nearly as strong, but also generated tsunamis. Remember that when people (as they inevitably will) start talking about the relatively low death toll from today's events as "a miracle": it was only a miracle comprising knowledge, understanding of history and plate tectonics, planning, engineering, construction, communications, discipline, and other sorts of hard human work.

The low cost in lives and injuries does not, however, diminish the pain and suffering encompassed in each of those lives. It does not make it easier to witness one's house or office destroyed. It does not clean debris from a formerly vibrant seashore, or put out a raging fire, or comfort an orphan.

It does tell us one thing. We have another reason, among many, to diminish poverty in the world. Because when a natural disaster strikes—indifferent, in itself, to the wealth of its victims—those who are poor are least prepared to face it, and more likely to find themselves under the rubble than figuring out what to do once it's cleared away.

Glad to read a key note on Japan's latest drama where everything is not about helping and praying. You wrote it perfectly, the poor are the ones suffering the most and the international community, sending billions of dollars of help and the work force that goes along, is helpless when it comes to the not so wealthy. Be it in Haïti, Malaysia or Japan, those guys whose lives hold onto thin carboard walls will be shattered and destroyed, left behind famished and homeless. No matter how well engineered the tall sky-scrapers of Tokyo or Sendai were built...
Thanks for the great words Derek.

Things are worse than they initially seemed: The death toll will likely be in the tens of thousands. The tsunami turns out to have been even more devastating than early news reports could convey. The ongoing Fukushima nuclear plant crisis what not what anyone expected.

But my point stands. Japan is a modern country—sometimes aggressively so. It has extensive and well-rehearsed plans for natural disasters. That so much has nevertheless been destroyed or crippled, and so many killed and injured, demonstrates what a titanic event the quake and water were.

Yes, most other countries don't have much if any nuclear power, but in any other respect the catastrophe would be much worse nearly anywhere else, especially in the developing world. Cleanup and recovery in Japan will be long. But in Haiti, well over a year after their calamitous earthquake, the Presidential Palace is still a crushed heap, though someone has mowed the lawn and put up a chain-link fence.

Here's a a great article (via my friend Ryan) on the nuclear reactor situation on Fukushima. The summary: it's not a nuclear accident, but tremendous damage from a natural disaster; and because atomic energy is a hot-button issue, it has overshadowed the true catastrophe of destruction and death wreaked by the quake and its tsunami (of which the power plant is a part, but a small one, really).

I'm turning this comment thread into a mini-blog, it seems.

I should be clear: the nuclear-plant crisis is a concerning issue in northeastern Japan, and the evacuation measures there are entirely reasonable. But those towns are still fields of debris and rubble. Hundreds of thousands have no homes. It's snowing.

We can omit the natures opinion. People these days are cruel enough in destroying natures beatification. Its all peoples fault.