When Dr. Anderson, the ear-nose-throat (ENT) specialist I saw today, grabbed his nasal endoscope (which I fondly thought of as his "nose cam") and took a look down my throat—an interesting experience for me, certainly—he was surprised. As a result, he's not treating my laryngitis yet. Let's find out why.

He asked me to try to hum, and I did, producing no sound at all, as expected. One of the vocal folds in my larynx wasn't vibrating, also as expected. When I try to talk, only one of my two vocal folds becomes "adducted" into position, and with no second fold to vibrate against, no sound happens. That's what laryngitis, or dysphonia, is all about: 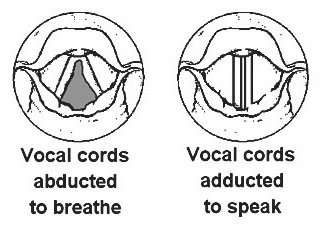 But the slack vocal fold wasn't the one everyone was expecting. With all the information in my cancer patient file, describing all the tumours in my lungs and around my spine, Dr. Anderson—like my doctors at the B.C. Cancer Agency's Pain and Symptom Management Clinic last week—figured some of those tumours might be affecting a particular nerve. That is the recurrent laryngeal nerve (RLN), which connects my brain to the left vocal fold.

Not the wacky nerve, not acid, not bacteria

For historical-evolutionary reasons, in most vertebrates (including human) the left nerve loops from the brain, way down into the chest, and then back up to connect to the left side of the larynx—yes, even in whales and giraffes, where the nerve makes very long detours. In my body, there are lots of opportunities in my chest for interference from tumours, swelling, and so on.

But the right nerve takes a more direct route from the brain to the larynx, and there's no evidence of cancer or anything else interfering with the performance of that nerve. And, in my larynx, the right side is the slack side.

Dr. Anderson peered around with his nose cam (glurk), and saw no evidence of scarring from injury, or stomach acid from my occasional vomiting, or bacterial infection—which the antibiotic I took last week would have addressed anyway. He asked me if my throat was or had been sore (no), if I had any troubles with choking when I tried to swallow (no), or if I had any throat spasms (also no).

Staying voiceless to reduce the risk

So he wants me to wait yet longer, and see if my vocal cords will heal themselves. Had my left vocal fold been slack, he probably would have treated it right away, because the source would be much more likely to be nerve interference, and thus perhaps permanent. Spraying or injecting the slack fold would snap it into the "adducted" position where the functioning one could vibrate against it. (I think he might use Teflon, though he didn't say.)

UPDATE: No, Teflon is not a likely agent, it seems, since there are newer and better things to try. So, no jokes about my non-stick vocal cords, I guess.

Sounds great, but he recommended against doing that to the right fold, because if it's not paralyzed by nerve damage, and isn't infected with bacteria, and doesn't seem to be affected by acid reflux from my stomach, it is much more likely to be something temporary, such as a virus. After all, my laryngitis began after my whole family developed a viral infection one weekend back in February.

I still have a chest cough, and my immune system is weakened, of course. Viruses can linger in my system for a long time, and if they've knocked out my right vocal fold, that could take weeks to heal. (My mother, by comparison, has been recovering from shingles for six weeks, much as my wife had to do back in 2004.)

So spraying my right vocal fold to lock it into position might be a bad idea, because if it can heal on its own, then both sides of my vocal folds will adduct naturally, and vibrate against each other, as they should. If it's locked into position, then only one side, the left side, will vibrate. It will work—though I guess my voice might sound different. I got the impression that the spray might also potentially injure the fold it locks into position, since that essentially forces it from abducted (open) paralysis to adducted (closed) paralysis.

It didn't occur to me until just now, and Dr. Anderson said nothing about this idea, but if we did snap the right side into a permanently adducted position, and later the RLN became injured because of pressure from my chest tumours and paralyzed my left vocal fold, I'd lose my voice again. I'm not even sure what the consequences and implications of that are. It would suck, to say the least.

So while it's tremendously frustrating, it does seem reasonable to wait. I will see Dr. Anderson and his nose cam again in a few weeks. I hope when I do, it will be with a naturally-recovered voice. If not, I'll plan to go with the spray then, and hope that will bring back my speech. In the meantime, if I talk to you, expect what I now think of as "the usual whisper."

Looks like Teflon is unlikely to be what Dr. Anderson sprays or injects if the time comes. There are many other options with fewer risks and side effects—most of which offer temporary relief and which may allow the opportunity for the vocal folds to regain their natural function after a few months, if they're so inclined. And if I'm still alive.

thanks, Derek, for the information...intriguing...But I'm very sorry you still have laryngitis - hope your voice returns very soon!

I had persistent laryngitis (not as severe as yours, but it sure wouldn't go away) a few years back. Got the nose cam and the whole deal too (a special experience, I feel no need to repeat)... It probably took 6 months to pass fully, very slow improvement and many plateaus where I thought it wasn't getting better (after a bad flu where I had extremely hard coughing).

The whole not talking AT ALL thing was really key. Whispering/rasping was just exacerbating the whole problem - apparently it can be worse than actually full voice speaking.

I really hope it starts to go away soon for you, it's awful being stuck at home lots *and* not being able to talk on the phone, to family, etc. *hugs*

i was going to warn you not to tell airdrie, but it's juvederm and the like they inject into the vocal cords if need be, but i see you've discovered that already. :)