Going with the evidence 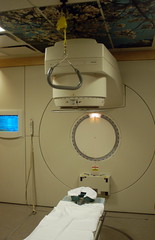 Science, particularly medical research, can be a slow process. Determining if a treatment is effective requires carefully designed studies, double-blind tests or randomized controlled trials, multiple studies, and rigorous statistical analysis. That's not red tape: without such methods it's not actually possible to know whether a treatment works and is safe, and especially if it works better and more safely than other treatments and for particular conditions. But it can take years even for preliminary reliable results.

That is frustrating for people, like cancer patients, who want something that can help us now. Almost as soon as I mentioned my colorectal cancer diagnosis back in January, someone emailed me about dichloroacetate (DCA), one of the latest potential "miracle drugs" that takes a different approach to attacking cancer cells, trying to switch their natural self-destruct mechanisms back on—a more natural way to get tumours to stop growing. So far Alberta researchers have found that it may do so in rodents. It will be years before anyone knows whether it is useful in humans.

The CBC has a fascinating set of interviews (MP3) this week with a cancer patient who has chosen to take the so-far unproven DCA instead of traditional chemotherapy, an underground DCA provider (it is simple to synthesize and is already approved to treat other medical conditions), and a medical ethicist from Alberta. The current DCA research team was not comfortable appearing on the same panel as advocates of using DCA before it has been clinically tested, and sent only a written statement.

I'm already part of a clinical trial combining two traditional chemotherapy drugs with a synthetic antibody and radiation therapy. I am certainly having side effects. But there is good evidence that the treatment I'm receiving, which will include surgery and more chemotherapy over the course of the rest of this year, can eliminate the cancer from my body. As part of the trial, I am also helping to build that evidence. Even the "traditional" method, with one chemotherapy drug plus the radiation and surgery, has a good chance of destroying my cancer—the study I'm part of is trying to figure out whether the extra stuff is even better.

On the other hand, had doctors told me that my cancer was inoperable and otherwise untreatable—in other words, if they had told me that I would likely die quite soon from it—that would be a different story. I'd be willing to try untested treatments like DCA and many others out there. Although choosing which of the myriad untested potential "miracle cures" would, of course, be rather difficult without good statistical evidence.

What worries me about the breast cancer patient interviewed on the CBC podcast is that she chose to go with DCA in lieu of regular chemotherapy—she's trying a treatment that may or may not work, may or may not be safe, and may or may not make things worse. Nobody knows. Nobody. And she's trying that instead of treatments that, while they have nasty side effects, do work for most people, and keep them alive. (Combining chemotherapy with DCA wouldn't be much better, though, because nobody knows whether the two treatments have bad interactions either.)

Even if her cancer does get better, she still won't know rigorously whether the DCA was the helping factor, although that will certainly be good for her. If it gets worse, she also won't know whether the DCA was to blame, or had no effect. It seems to me that she has taken what should be a last-ditch effort and applied it before she's even reached the first ditch.

Then again, as my gastroenterologist Dr. Enns said to me back in January—when I still thought this treatment would take a few months and not a whole year—a person is not a number, and each one of us must be treated for our disease, not for the average of all diseases. I'm making my choices here to follow the studies and the trials and the evidence.

That kind of rigorous research already saved my life once, when I developed Type I diabetes in 1991, and didn't die from it as I would have a century earlier, because of the discovery of insulin and the synthesis of the genetically engineered variants of it that I still take every day. It has kept other cancer patients in my family—my father and my aunt—alive for decades since their diagnoses and treatments, and brought my uncle through a fight with colorectal cancer just last summer.

There are plenty of people sending me prayers and good vibes and positive mojo too, and they touch me by doing it, even though I put little stock in those things. And a positive attitude is likely to do well for me too, so I'm trying to keep that up.

But in the end, I put my trust—and, more importantly for me, my judgment—in letting the intellectual and medical process (as well as my cancer doctors Dr. Kennecke and Dr. Brown, who are some of the smartest people I've ever met) try to keep me alive too, once more. For most of human history, I'd have been dead twice over by now. Because of heavy brain work, not this time, I think.

What really bugs me are people like Suzanne Somers, who plump for "alternative treatments" and give them credit for cures, without highlighting that they had conventional treatment as well (in her case, radiation and surgery). Gee, do you think the early detection, radiation and surgery might have helped the mistletoe?

derek--i am thinking of you and am confident that you will get through your treatments to spend a long joyful life with your family. while i believe that we are better off for having surgery drugs and radiation available to treat cancers what i have learned is that cancers are quite individual (depending on how they have manifested in the body) which can affect the way that they will react to the treatment. i was diagnosed with thyroid cancer almost 6 years ago and based on its growth patterns have decided against conventional treatments in favour of more unconventional ones--with positive results. i believe the woman in the cbc interview did her research before using dca and after weighing the options decided that it was the best route for her at this point in time. people have gotten better on conventional treatments and they have gotten worse. likewise for alternative treatments. the important thing is to remain proactive and learn as much as one can and then make the best decision at that time. if the cancer changes then the protocol will likely change too. i try not to give my two cents when it comes to personal decisions such as this but believe that there is truth in what dr enns said. stay strong derek, cathy

What I know about statistics :

1/ for you, it can only be 0 % or 100 %. My husband has a friend who was the first person, at least in France, to get a heart graft and survive (it was something like 25 or 30 years ago, and he is the oldest survivor in Europe, or in the world, or something approaching). So there was 0 % chances for him, but he survived 100 %, and went through college, and built a life. He never dared have a family, though, because I think he never felt allowed to.

2/ When you get the statistics, they are already old. You are "cured" of your cancer when you survived 5 years without repeat of the cancer. So when you get the stats, they are already of people that have received treatment in 2002, and oncology is like computers, there is a revolution every second year. So you must always have in mind that you are part of a better statistic than the one you read.

That's right. They have to test, beforehand. Test is essential in many fields actually. It makes you know that something actually works, probably under uncertainty, when many things can affect the desired result. In medical field, and others obviously (like critical software systems), it's probably more complicated, because a treatment may also do harm.

Unfortunately, your best bet is to be a guinnea pig I am afraid. I would do it, if I had such a serious problem and the choice. Lucky you, you live in a place where you can be part of research and where there is actually research going!

What cancer your father has?

My father had testicular cancer in 1971, when I was two years old. He has been cancer-free ever since.

I would also like to say, don't always think in terms of "There are good chances that the cancer will completely get eliminated or not". It may happen of course. But what if you get 20 or even 30 more years of life? Still, it's a lot of time I think. You could die from something else in the mean time. Even if you get 10 more years, very likely probably, that's still a lot of time, to enjoy life and be a nice husband to your wife and a nice father to your kids. Even better of course if you get cured, but you'll never know until you get very old and even then you may get another cancer or die from another disease or even a thief may shoot you down while attempting a robbery (it's possible!).

Testicular cancer is one of the few cancers that are very curable. Your father was lucky, in a weird sense of luck I suppose, to get that kind of cancer.