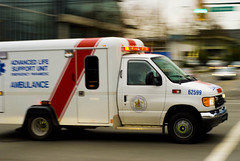 Yesterday turned out not so well after all. Turning corners is sometimes tricky. Around 4 in the afternoon I started getting diabetic hypoglycemia—low blood sugar—which does happen from time to time. I've been diabetic for 16 years, and my usual treatment is a simple can of Coke, which usually takes care of it quickly.

Not this time. I was unable to stabilize my blood sugars with Coke, with snacks, with juice, with brown sugar, with pudding, or with anything else. My wife became worried about me, as did I, because unchecked hypoglycemia can make me pass out.

Eventually we called an ambulance, which took me to Burnaby Hospital's Emergency ward, where they stabilized me and gave me some food. A few hours later the doctor discharged me and I went home.

After I had a bath and calmed down some, I read through the customer information for the couple of new antibiotics I started taking, which were the only new things that had happened yesterday.

Sure enough, one of the two drugs "may affect your blood sugar." No kidding. I had specifically asked my prescribing surgeon whether everything was okay for diabetes, and had mentioned it to the ambulance crew, and the nurses, and the doctors at the hospital, but no one knew about that. Just a reminder to be vigilant about your medications—the professionals don't know about every possible interaction.

Scary. I'm glad you're ok now. Talk to me about meds. I'm on five different kinds for high blood pressure (at 38!), fortunalety no side effects (yet). Continued good wishes.

Which antibiotic was it? I have low blood sugar and it never occurred to me that antibiotics could do that.

Ciprofloxacin was the nasty one. The blood glucose effects were WAY down in the fine print.

Cipro? Really. Thanks for letting us know.