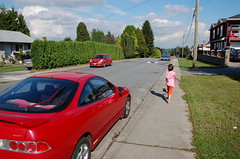 It's been more than six weeks since my major cancer surgery, and only now do I feel like I've turned a corner in my recovery. Not that I'm "all better," but I'm improving, and at a better pace.

For instance, I was able to walk with my daughter and our friends' dog a full four blocks from our house and back, without using my cane or a wheelchair. I was tired when we returned, but I made it. Some of my pain and other symptoms are gradually going away. I may even be ready to start my next round of chemotherapy soon, which is something I am looking forward to—an odd thing to say. I've gained some 15 pounds from my record low in the 145-pound range, so that's a relief, even though I'm still a long way from my 200-pound average of the past several years.

But the fatigue, huge and oppressive, is my main remaining side effect, and it isn't changing much. Yesterday I drove the car, had a doctor's appointment, and went out for dinner. After that I had to sleep for four hours to recover. Today I took the kids for breakfast at McDonald's, and had to lie down for an hour afterwards too.

So it's a shallow corner, but I'm turning it. I think I'll be able to walk my daughters to school in a couple of weeks. That was my goal.

Baby steps, but even these count.