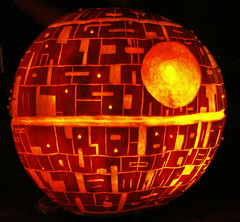 Wired reports that Mark Crispin, the guy who invented the IMAP email protocol more than 20 years ago, is unhappy with Gmail's new implementation of his creation. "The consequences of the current [Gmail IMAP] server being presented as a completed product," he says, "would be far worse than their not doing IMAP at all."

Similarly, Nancy McGough, who maintains a remarkably obtuse page about IMAP that includes a strangely-sorted list of IMAP email providers, is now optimistic about IMAP, but still laments that, "We need e-mail messages to be linkable, annotatable, and access-controlled. Basically we need all our e-mail in a wiki with multiple levels of access control..."

Whoa. Okay, okay. Let's calm down a little. I can't imagine my in-laws managing their email as a wiki with multiple levels of access control, you know. As someone who has been a little obsessive about validated HTML, I can understand the geeky impulse for wanting standards (especially ones you've invented, or spend a lot of time on) being fully supported. But if you check right now, this web page doesn't quite validate—mostly because I occasionally embed YouTube videos (also owned by Google) on my site, and their default code is broken.

You know what? That's okay. The Internet is a success because of Postel's Law ("be conservative in what you do, be liberal in what you accept from others"), and while Google isn't following it—they're being a bit sloppy in what they do with IMAP, as with many other things—the rest of us can follow our part. I can accept Google's sloppiness, at least temporarily.

Just to note, Gmail is still labeled a "beta" product (almost four years of that so far!), so Google has a theoretical excuse here. Yes, IMAP's benefits were obvious even a decade ago, and many services like Apple's (for-pay) .Mac have offered it for a long time. In fact, I was using IMAP without knowing it when I used to check my university email with pine through a 2400-bps dialup modem back in 1992.

Douglas Adams had a wonderful definition of a nerd: someone who uses a telephone to talk to other people about telephones. One of the problems with many open-source and other geek-driven IT initiatives (like IMAP) is that they're often wrapped up in nested vortices of nerdery that demand note-for-note perfection in implementation—perfect for emailing other nerds about email. Google's approach, while imperfect, is also pragmatic: get it out there and fix it over time.

Obviously Crispin and McGough see that too. To them it appears to be a nasty set of flaws; I think it's just real humans trying to make something work. My website here—a much smaller example—started out technically problematic, and has generally gotten better over the past seven years. It's good that the alpha geeks behind IMAP are pushing Google to implement it properly. I don't think it's terrible that it didn't start out that way, however.

And speaking of nerdery, check out these awesome jack-o-lanterns. The Death Star one is my favourite.