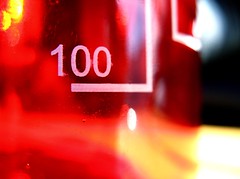 I didn't really get podcasting at all until the middle of 2005, which was some months after the technology first appeared in late 2004—and right about the time iTunes started supporting it. The first person to start a real podcast in our family was my wife, who launched Lip Gloss and Laptops with her friend KA in March 2006.

Their show has now reached its 100th episode. That would be a milestone in any medium, but in podcasting it's a big one. A good percentage of podcasts podfade and stop publishing long before their 100th show. Others, like my my personal podcast and the other one I co-host, publish irregularly and so take a long time to rack up the numbers (despite starting back in 2005, Inside Home Recording hasn't even reached episode 60 yet).

But other than a few holidays over Christmas and such, Lip Gloss and Laptops has come out every Wednesday for over two years. Even if you're not into the beauty and cosmetics industry, which it covers, it's an interesting and informative listen. (As the show's audio engineer, I hear every episode.)

So congratulations to Airdrie and Kerry Anne on their 100th show. I'm sure they'll be hearing lots more cheers from their fans around the world too.

Derek, thanks so much for all of your hard work through thick and thin(ning hair). I appreciate you helping us out even though I know it hasn't always been easy for you this year.

As a listener from the beginning and an avid reader of your private blogs, let me say kudos to the ladies as well as to you for a great job despite everything.