It's been nearly a year since anything went wrong with my MacBook laptop, but overall, it hasn't been a paragon of reliability. The battery, motherboard, fan, DVD drive, and hard disk have all (!) needed service. Now there's this: 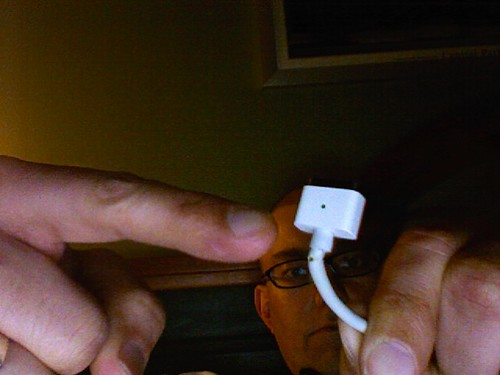 UPDATE: It looks like AppleCare will replace the adapter for me, no charge. I'm taking the old one in to a local Apple dealer today.

Right from when it was announced in 2006, I thought the MagSafe power connector, which pops out if you trip over the cord rather than dragging your laptop to the ground, was a smart idea. But the sharp angles and minimal strain relief of the design also seemed fragile to me, and I appear to have been right. I know several people whose MagSafe adapters have failed exactly as mine is: the cord wears through right next to the computer end of the connector.

Conversely, my wife's round iBook connector continues to work just great, even though it is a year older, and it's rare to hear of those adapters failing in a similar way at all. The new MagSafe design for the MacBook Air seems like it might be sturdier, but I don't think the actual power brick is rated for enough voltage for my bigger MacBook.

The pity is, because Apple has patented the MagSafe design and has not licensed it to other manufacturers, you can't buy yourself a third-party MagSafe-compatible power adapter with a better connector. So whether AppleCare warranty covers it or not, I'll end up with a similar flawed design, which may fail on me again in a year or two.

My magsafe adapter has come apart at the power supply end. Still works, and I see they've wrapped a cable in with the wires to keep it all together. However, I'm hoping I can get it replaced under Applecare. This is my second adapter - the first failed the first day I bought the computer...

My original one - first release Macbook - failed there. mostly due to my son incessantly fiddling with it. I managed to expose a whole 1mm of co-ax and solder it, then set the joint in epoxy resin. It lasted 6 months, until it failed at the power-supply end. I bought a new one, and there is now a longer sleeve, which I imagine will last longer.

rWell, your wife must be either luckier, or more careful than we are, because we had the very same problem both with the round connector (we had to replace it twice in 5 years, and it is very expensive) and with the MagSafe.

The MagSafe was changed by AppleCare, though. JH takes the insurance. I don't, so when I buy computers, I pay for adaptators.

I've had to buy a power adapter for my macbook THREE, count em, THREE TIMES. I'm at my wits end and I'm debating whether I'll buy another macbook again because replacing these power adapters isn't exactly worth it. I just can't understand what it is about Apple that they can't build a reliable and good power adapter but keep hamming out these crappy ones. It doesn't make sense considering they run reliable and sturdy machines and can't think to sell power adapters that meet up to that. I'm so pissed with Apple and their crappy customer support (The first time this happened to me the lady told me to go to Radioshack, if only Apple was like Windows and allowed their products to be fixed by technicians, but NO, you have to take them directly to Apple which just makes it all the more grating...). I'm totally done with Apple somehow thinking that they can treat their customers anyway they want because they think the Laptops are ABOVE their customers. Apple, you can keep your shitty adapters if you are going to continue this way. It's too much money and hassle for me to constantly go out and buy them!!!