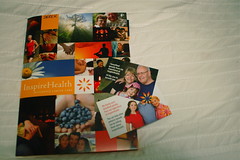 Last week my wife and I attended a two day "life enhancing seminar" at Inspire Health, an unusual cancer-treatment facility in the Fairview area of Vancouver. It is indeed an inspiring place, and an unusual one.

Inspire Health (formerly the Centre for Integrated Healing, and now ten years old) advertises itself as "integrated cancer care," and what that means is that they take a whole-person approach to battling and living with the disease. There are several medical doctors there, whose consultations—the first one is 90 minutes long!—are covered by the regular B.C. Medical Services Plan (and so don't cost me any money). But there are also many complementary treatments such as acupuncture and massage available (for a fee, as elsewhere in the province), in addition to a whole bunch of supportive resources in the form of free yoga and meditation classes, a resource library, and so on.

The seminar itself costs some money, and is a sort of boot-camp introduction to the centre's philosophy, with numerous speakers over two long days. It's difficult to summarize, but the nub of it is to help patients like me take control of our health and treatment. That's a change for me. It's not that I've been timid about my cancer care over the past two years—but I have been pretty passive until recently. I simply lined up and took whatever my doctors could throw at me to try to destroy the tumours in my body, and suffered whatever pain and side effects that entailed. Here's what I wrote in March:

...The basic choice has been: Treatment or death? Yes or no? That's a pretty easy decision. My real choices have been pretty small...

The choice is no longer so stark, because the conventional treatments I'm taking now (like Cediranib) are more investigational, and I have to weigh their benefits and disadvantages more explicitly. Inspire Health is designed to help me make the more complicated decisions that come now, and to get me eating better, exercising more, relaxing effectively, and overall feeling better—all of which may assist in reducing the effect of cancer on my health, and will certainly help minimize the side effects from the treatments I decide to pursue.

Based on medical advice well supported by good research, I'm already taking some useful (and extremely non-bizarre) vitamins and supplements, and we've started eating more organic and whole foods, as well as improving our family's nutrition generally, which can only be for the good. I'm getting out for a brisk walk pretty much every day, even in the nasty weather, and instead of buying a coffee I'm often getting one of those bizarre-looking but surprisingly good-tasting carrot-spinach-beet–type fresh juices at the mall. A couple of days ago I attended my first-ever yoga class at Inspire Health, and though it was a beginner's session and very slow and gentle, it was also surprisingly strenuous. I'll be going back next week.

What's perhaps most unusual about Inspire Health is the nature of the space itself. While it is in many ways a medical office, it looks, feels, sounds, and smells nothing like one. It's decorated in subtle earth tones, with plenty of art. The hallways curve subtly. The lighting is gentle and incandescent. The furniture is soft and comfortable. It smells like warm spices and tea. It's relaxing, not stressful. As you might expect from my description, there's a certain new-agey granola vibe, which as a hard-brained science-dude rationalist I have to work to avoid being a bit cynical about.

But it works. I recommend that any cancer patient in the Vancouver area try it out—we're lucky to have it, because it's one of the only facilities of its kind in North America. Go there, for a doctor's appointment or a seminar or a yoga class, and you feel better just walking in, which is a big contrast to any other medical facility I've ever visited. And there are a lot of smart people associated with the place. Will all this stuff slow or stop my cancer? I don't know. But I'm already feeling better, no matter what else happens.

I hope the facility continues to meet your needs - it sounds great. Can anyone here recommend a book/website on parenting with a chronic illness? I'm reading one book right now, but it is decidedly NOT attachment parenting-focused, at least from the early chapter I've read.

I'm glad you're enjoying it, Derek! My partner's mom had care there a few years ago when it was still under the old name and had a really positive experience as well.

I hope you continue to post about InspireHealth -- I am considering going to its programs (from Ontario) and would appreciate hearing more about it. My oncologist has the (wise, I think) advice that one shouldn't pursue any particular course of action with a given outcome in mind (as that outcome is never guaranteed); instead, we shoud look at WHY we are pursuing it. Doing something like InspireHealth programs because it makes us feel better and more empowered sounds pretty good to me!

Hi Derek,
I am so glad,you went to that seminar.Now you got the tools to take matters in your owne hands and not just feeling like a victim of the cancer.
More power to you.
Love,Margarete

Have you checked out www.spud.ca? They deliver organic produce (as well as great local breads, etc) to your door. It's a bit more expensive than buying it yourself, but they tell you where the food comes from so you can support local farms, and the time savings of not having to go out to shop are invaluable. Brooklyn and I both get home delivery and love it.