UPDATE 11:50 p.m.: Guest posts for Blogathon on Raul's site by my wife and by me are now online. The Blogathoners have a little over six hours left. Go go go! 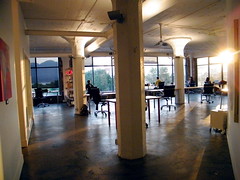 Words change. Marathon was originally (and still is) a plain in Greece, but after a battle there between Athenians and Persians in 490 BC, legend says that messenger Pheidippides ran a little over 26 miles to relay the result, and died from heat and exhaustion. More than two thousand years later, his distance was established for races at the Olympics and elsewhere, now called marathons. Deaths, fortunately, are now rare.

Over time, marathon also came to mean anything that took a long time and a lot of effort. After the invention of television, we got the telethon: fundraisers broadcast on TV over many hours or days, focused on a particular charity or cause. Many of us raised in the 1970s don't think of Jerry Lewis as a movie star, but as the guy who ran the telethon.

Now we have blogathon, where numerous bloggers (close to 200 this year from across North America and beyond) post something every half hour for 24 hours. This year's event began at 6 a.m. today, and runs till the same time tomorrow morning. Each participant can choose his or own charity, so there are lots of options. Here in Vancouver, we have quite a few friends doing the blogathon:

Many of the blogathoners are at Workspace in Gastown today, and I plan to drop in with my kids sometime this afternoon to cheer them on for a bit. Visit their blogs and choose a worthy cause for a donation, why don't you?

Thanks for this Derek! Coincidentally your blog post is about to be published (12.30pm)... looking forward to seeing you, Miss M and Miss L later today!

Can you bring some gin? Everyone here is lamentably sober. How is anyone supposed to blog in THAT condition?

Thanks for the shout out, Derek! Sorry I missed you at Workspace. Tod and I went there for the late, late hours of the night!