Many Olympic victories are won by the slimmest of margins. For example, today, Canada's Christine Nesbitt garnered a gold medal in speed skating by 1/50th of a second, while traveling as fast as a car.

But then there are those athletes who so dominate their runs that they're almost in a different race. Maëlle Ricker did that in her gold-medal snowboard cross event a couple of days ago, opening up a huge lead within the first five seconds and disappearing beyond the other riders' horizon shortly after. 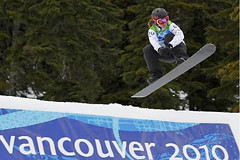 China's Wang Meng performed a similar feat in short-track speed skating, setting an Olympic record and leaving her rivals, including eventual silver medalist Mariane St-Gelais of Canada, to battle for the other two medals. 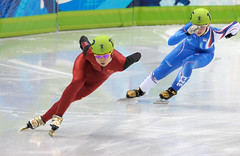 And of course there's Shaun White, the American snowboarder who already had the halfpipe gold medal sewn up, but used his second run to annihilate any prospect of competition from other riders. I was at the Irish House pavilion in downtown Vancouver when his run appeared on the big screen, and you could see jaws drop across the huge room. I don't know much about snowboarding, but even I knew that his near-impossible tricks meant no one could touch him. 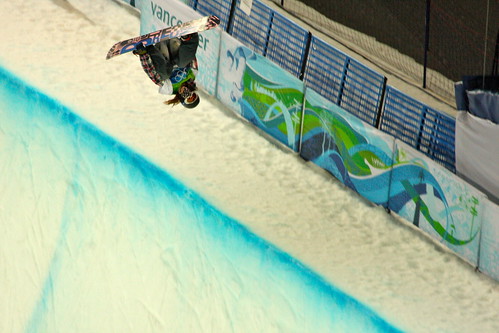 The Olympics often seems like a huge circus of media and entertainment and money and megaproject building. It can obscure the actual sports. But when you witness the achievements of truly outstanding individuals, you remember, and you have to admire what they can make the human body do.

From Google's Blogger terms of service: "Google claims no ownership or control over any Content submitted, posted or displayed by you on or through Google services."

In other words, what you post to Blogger is your own, and remains so, although you license Google to publish it for you, which is no surprise.

"but used his second run to annihilate any prospect of competition from other riders."

Shawn was the last boarder to go, he had already won the event before his second run, so no other rider had any prospect prior to his second jump.

Exactly. He'd already won, and then he won even more.

On the Colbert show last night, he said he considered just riding down the middle of the halfpipe without doing any jumps at all, but decided against it.