Digital executors and what happens to your online stuff 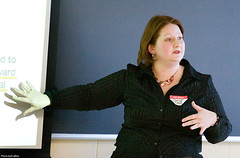 I had a long Skype conversation with Adele McAlear (pictured, courtesy of Eva Blue) from Montreal today. Adele is researching a book about death and digital legacies, which is something I've talked and talked and talked and talked about over the past couple of years—though I haven't done very much about it. I have made an inventory of usernames and passwords that my wife Air can access, and mentioned to some of my tech-savvy friends that I'd appreciate if they could help her with some of the more obscure aspects of my online life when I die, but that's about it. It may also be enough.

I've also some efforts to make sure that the stuff I'd most like to preserve online, such as the contents of this website, is relatively easy to keep running too. That motivation, for instance, is the source of my weird obsession with using static text files to publish my blog—much to the puzzlement of my friends who use WordPress or Drupal or other great software that doesn't meet my particular need.

Chances are you haven't thought about it

The gist of my gabfest with Adele was that, as far as we can tell, most people online, and most companies that run services online, just haven't thought at all about what will happen to users' online stuff if they die. They also haven't thoroughly considered what to do to preserve stuff that needs preserving, or destroy stuff that needs destroying, or even which stuff might be which.

It's quite easy to assume some things to be permanent (photos and videos you've embedded on your blog, say) when they might not be. It's also easy to think that other things are ephemeral and semi-private (maybe tweets, Facebook wall posts, even emails) when they can become public and archived. In short, our gut assumptions can be radically wrong.

It's true that many people, especially non–senior-citizens, haven't considered what to do with any of their stuff when they die, or how to preserve or destroy it. But our physical, non-virtual stuff has a long history of laws, regulations, and established procedures for how to deal with that: probate and property laws, next-of-kin rules, and so on.

Who decides now is not who used to decide before

Not so online. If you haven't thought about and planned for what you want to do with your blog entries, photos and videos (including those directly uploaded from your phone), email, PayPal funds, Twitter posts, Facebook updates, online ad revenue, and so on, then if you die or are incapacitated, or if you simply want to get rid of them, or let someone else manage them for you, you may be at the mercy of whatever policies your particular service providers have in place. Those policies can be wildly inconsistent from one service to another, and they may change. You may not agree with them either.

Adele gave a good example of what's new about that. If a loved one has kept a personal written diary in paper books for years under his or her bed, then when he or she dies, someone close (family, friends, others living in the house) will probably come across it and decide what, if anything, to do with the contents. But if that same person wrote the same things on a private LiveJournal (and told no one the password), it's LiveJournal that is the gatekeeper, and decides who gets access. Their policies don't seem formalized, but Adele's investigations indicate that a private LiveJournal archive might not be shared with anyone, ever, as if it never existed.

There can even be money involved (and lost!), such as if you have a significant balance in a PayPal account, or with an online bank without real-world branches, or if your blog generates advertising or affiliate-program revenue.

In the worst case scenario, such as if you use very secure passwords and don't share them with anyone (or don't write them down and put them in a safety deposit box), then your family and friends may be completely unable to access any of your accounts. Then, your online presence might be frozen (in some cases), unceremoniously deleted (in others), or simply slowly vapourize as accounts expire or services shut down and move.

Make your own choices

If that's what you want, fine. But if you prefer that some of it be preserved, or some of it be deleted and never seen again (perhaps if you blog anonymously and don't want that tracked down), then someone will have to do that for you—a digital executor. At the very least, that person (whoever it is) needs to be able to find out your email username and password, from which many other accounts can have their passwords reset, and go on from there. But more may be necessary.

While I currently appear to be the #1 Google result for digital executors, and might have even coined the phrase a couple of years back (I'm not sure), Adele has a much better post about what they are, and also has a great how-to on using Gmail to set up instructions for yours.

She also told me about the recent first Digital Death Day meeting, which grew out of the Internet Identity Workshop. Quite coincidentally, that was founded by "Identity Woman" Kaliya Hamlin, who just happened to be a student of my wife's quite a few years back.

It's a small online world. Make sure you've made some decisions about how long the evidence of your existence in it will persist.

Derek - it was a real pleasure to speak with you today. It's great to get your perspective and to talk with someone who has clearly considered these issues before. Thank you for your time and I hope that we have the opportunity for more discussions in the future.

I've been meaning to write this up for a while myself. I actually have a relatively good system for managing, and it's fairly effortless.

It's all in 1Password. I store my life in there. Every login to every site I use, including domains, hosting accounts, social sites, email, everything. Plus thanks to secure notes I've got a place to put non-digital passwords/info as well, things like bank account info, phone confirmation codes, etc.

Every time I create a new login, it goes into 1Password and stays there. Every time I change a password, I do it in 1Password. It's a completely up-to-date repository of all my online accounts, and this all happens automatically just by using it.

I've got the master password obscured and written in a secure place only my wife knows. Anything happens to me, she's got access to everything.

Dave, just hope nothing happens to both of you!

I use Apple's system-wide Keychain for a similar purpose, and have it backed up in a few places in addition to the hard-copy password list. Not quite as powerful as 1Password, but it does the job, and it's built in to Mac OS X.

By the way, the people at Entrustet, one of the sponsors of Digital Death Day, did some calculations using American government statistics, and estimated that 285,000 U.S.-based Facebook users (!) die every year. This is not a small matter.

I'm giving my husband all my passwords as of right now. I shudder to think of myself living on, on facebook and being "suggested" as a friend to someone.

I wonder how many "zombie suggestions" already happen? I know my friend Martin was still appearing in my friends list and elsewhere in Facebook until I arranged to have his page "memorialized" almost two years after his death.

I've thought about this for years, since I've been the digital executor for all of my husband's accounts since he died nearly five years ago. He worked in IT in his last eight years, and had been online since 1995 so you can imagine how many accounts he racked up.

My executor (or, executrix, if I'm to be proper) is also my digital executor. I have everything saved in my Apple keychain as a backup, and she has the master password for my Macs. I also have most of the accounts logged (there are always new ones), and thankfully she's computer literate because I have a stack of personal websites and manage a bunch of others as well. As my digital footprint grows, I think I will end up asking my brothers to help out with this.