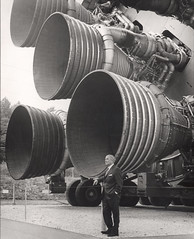 My oldest daughter and I saw In the Shadow of the Moon today. She's a nine-year-old Discovery Channel junkie, and so agreed right away when I suggested we go. The screening was sparsely attended because the film has been out for about a month, and it is a documentary, after all.

I was three weeks old when Neil Armstrong and Edwin Aldrin landed on the Moon, so obviously I don't remember it. But just as obviously, it's been part of my psyche my whole life, especially because my dad is a keen amateur astronomer, fascinated by the Moon since his childhood. (I even had the privilege of examining some real moon rocks loaned to my grade 8 science lab back in 1982.) I thought I'd seen almost all the lunar footage out there, especially the stuff from Apollo 11.

Wrong. In the Shadow has tons of new stuff, totally aside from the entertaining interviews with the surviving Apollo astronauts (except the notoriously reclusive Neil Armstrong). Slow-motion HD-restored film of snow-like ice shedding from the sides of the Saturn V rocket as it lifts off the pad and slides through clouds of steam rotating across its metal skin. New views of Armstrong descending the ladder of the Lunar Module (LM) for his "one small step." Sound and video of the ground crew wiping their sweaty brows as the LM crew skims their craft over dangerous lunar boulder fields, almost out of landing fuel, trying to find a flat place to set down. Precious, fearsome liquid oxygen—instantly frozen to tiny crystals in space—spewing past the window of the crippled Apollo 13 command module.

At some moments, I got a bit weepy. We haven't been back to the Moon since I was three, so I don't remember any of the Apollo lunar missions. In the following few years, as I learned about them, I became convinced that moon missions would be common when I grew up. But, as Roger Ebert wrote some years ago, in reviewing Ron Howard's Apollo 13 docudrama:

This film reminded me how amazing it was that we got there at all when we did, at pretty much the first moment it was technically possible. Not safe, not wise, not sensible, just possible. The men in the movie—garrulous and funny Michael Collins, wry Aldrin, grandfatherly Jim Lovell, frail but firm John Young, and stern and trustworthy Gene Cernan among them—are old now, but they were young then (the same age as I am today). They achieved a great thing, maybe the greatest thing anyone has ever done. That's worth remembering. 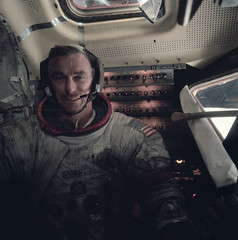 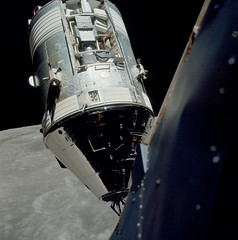 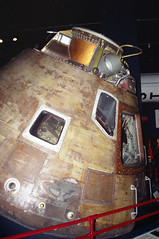 A friend of mine saw that documentary saying the moon landing was fake, and now he's convinced that it is. Of course, 9/11 was a plot by the American government, etc. etc.

The whole ending credits has the astronauts responding to conspiracy theories of that sort (which is a sad comment in itself). As one of them said, "We sent nine missions to the moon and back. [If we faked it], why did we fake it NINE TIMES?"

Derek, she's your "elder daughter," isn't she? You've got only two daughters, right? One younger, one older... and since nine years old is not that old, she's just "elder."

Oh, I guess you can use the superlative when she's the eldest. OK, all right. But how about "eldest," so that you don't sound like Methusaleh with 500 daughters, some of them in their 70s? ;)

As an editor, I think they're all correct, but "oldest" seems the least stuffy (or "less stuffy"), and most appropriate for an informal blog.