UPDATE: Via John Gruber, here's an excellent introductory article on buying a digital SLR camera. I think author Mike Davidson should expand from his emphasis on Nikon and Canon alone, but all his essential advice is good regardless of brand. As you'll see in the rest of my blog post here, though, you might want to see what Nikon announces in the next couple of weeks. 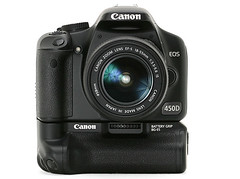 In advance of the upcoming PMA photo tradeshow, camera manufacturers have started spewing out announcements about their new products. I'm most interested in information about digital single-lens reflex (DSLR) cameras, because a Nikon D50 SLR is what I use now, and SLRs (film and digital) are what I have used for most of my photo-taking life, which stretches back almost 30 years to when I first started to figure out my dad's old film Pentax with "Asahi Pentax" viewfinder cover.

The DSLR market is especially hot right now—I was amazed at how many pre-Christmas ads were not for the regular point-and-shoot digicams most people still use, but the bulkier yet more powerful and flexible SLRs that enthusiasts prefer. It helps that the DSLRs are a whole lot cheaper than they were even a couple of years ago. Now that digital is the way everyone shoots, it makes sense that a good number of average buyers would be hitting the limits of their little cameras and wanting to take nicer pictures—not to mention that manufacturers get more money out of both the higher-priced cameras and the greater range of lenses and accessories we love to buy for them.

So far I've seen news about new intro-level DSLRs from Sony (who bought out Konica-Minolta's old camera business), Pentax (who also have a new higher-end model), Samsung (almost the same as the Pentax, since the two companies collaborated on the design), Canon, and even an almost-SLR from Fuji, which has a fixed lens but the bonus of a flip-out LCD screen and a movie mode, which true SLRs all lack. Nothing from Olympus, Panasonic, or Nikon yet, but that will come.

Since Canon and Nikon are the heavyweights in this field, Canon's new Rebel XSi (a.k.a. 450D) is the highest-profile of the bunch, though I have to say that Pentax, after languishing for some years, is really coming on strong with their recent DSLR range. The Canon XSi is a descendant of the Rebel XT (350D) my dad owns—Canon's Digital Rebel DSLRs have hugely dominated the market since they first appeared. On Flickr, for instance, it looks like there are more photgraphs taken with the XT and XTi than all other DSLRs combined. (Canon also overwhlems all other point-and-shoot makers too, by the way.)

Since Nikon (and Canon) recently introduced new high-end prosumer and multi-thousand-dollar professional SLRs, I'm wondering whether Nikon might have something less spendy to counter this new Canon model. The low-end D40 and D40x are already a success, and are not especially old either. So while I could see a new introductory Nikon, I think it's much more likely that we could see a successor to the D80, which came out in 2006, around the same time as the XSi's older sibling the XTi (400D).

Features that the D80 doesn't have, but which are becoming common in DSLRs, include dust reduction, live view (like point-and-shoots all have) on a large rear LCD screen, and of course faster-better-more in burst shooting, image quality, and maybe megapixels—although Nikon has been surprisingly smart in not letting the megapixel wars infiltrate their SLR sensors too much.

So, a D90 (or whatever) would be cool to fill in the (rather wide) gap between the D40x and the D300, and once again to fit in nicely among Canon's midrange and pro offerings, which now include the 40D and full-frame 5D—also showing its age, even if it is the current favourite among many professionals.

what are your thoughts on the "hybrid" that panasonic released last year, the FZ18?

It's interesting, but I'm not really up on my "ultra-zoom" compacts, so I can't say how it compares to similar models from Olympus and Fuji.

I was wrong. (Okay, I hedged with "...while I could see a new introductory Nikon..." but pretty much dismissed it.) Nikon's new DSLR is an introductory model, the D60, not a replacement for the D80.