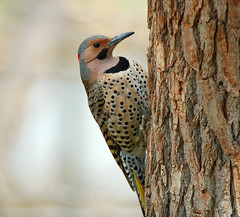 According to the provincial government, there are 12 species of woodpecker that appear at least occasionally in British Columbia, but only a few are common in the southern coastal areas outside the summer months. The one I've noticed most often is the pileated woodpecker, with its distinctive red swooshy head.

Right now, one of these guys is being a real goddamned pecker around our house.

UPDATE: I think I have unfairly maligned the pileated woodpecker. Although I still haven't spotted it directly, numerous reports from my readers and more careful listening to the infernal tapping tells me that our woodpecker is more likely to be a Northern flicker (I've updated the accompanying photo accordingly). In any case, a suggestion to burn some paper under our stove hood when we hear the tapping, so smoke sends the bird away, may be working. We'll see.

You see, it has decided that the metal chimney above our stove is an ideal target. I don't know why: if I were a woodpecker, I'd probably figure out fairly quickly that there aren't any tasty grubs living inside a kitchen vent. Then again, woodpecker skulls have evolved largely to withstand massive repeated impacts, not for smarts.

Now, imagine what it sounds like at, say 7:18 a.m. on Easter Monday, to have a woodpecker pounding away, Kalashnikov-like, on a highly-reverberant tube of metal that leads directly from the roof of your house into the amplifying stove hood in the middle of your kitchen, which is in the centre of the structure, right across the hall from the bedrooms. This has been going on intermittently for two or three weeks now at our place.

I stumbled out of bed and turned on the stove vent fan (which is very loud, being older than I am). No dice. So I wandered outside in bathrobe and bare feet and hucked a couple of small stones from our yard in the general direction of that part of the roof. I was surprised at my accuracy at such a bleary-eyed time of the morning.

There were some clattering noises, and I think I scared it off for now. It's likely pileated—the largest surviving woodpecker variety in North America, by the way—from the sound of its drumming, but I haven't actually seen it yet. I suppose if it persists in trying to find an insect colony in our kitchen chimney, it will eventually starve to death, but maybe it's clever enough to be working on some nearby trees too. I hope it avoids punching a bunch of holes in the aluminum, anyway, and that it gets the point (ha ha) eventually and moves on. Or I'll have to get better aim.

we have a similar experience, only with another member of the woodpecker clan, the northern flicker. it loves to pound away on the metal cap of the chimney chase. this happens to be about 8 feet above our heads in the bedroom. quite the alarm clock.

and btw, don't expect it to end anytime soon. we've been told that what it's doing is signalling to other flickers that this is it's territory. it has been going on for all 7 years that we've been living in this house.

We have had this same thing occur at both or old house (in Castlegar) and at the current house (in Kelowna). We were told that they are not looking for bugs in the metal chimney, but that they are declaring their territory and calling out for a mate.

I found something online that may help: "Woodpeckers may be excluded from some surfaces by covering the area with plastic, nylon netting or hardware cloth. " and :"Some research also suggests that mirrors frighten woodpeckers. Fastening mirrors flat against the wall next to the damaged area is believed to be effective when the woodpecker sees its own image and it thinks it is in another birds’ territory." Good luck!

Thanks! We'll see if any of that works.

Got some further advice:

"So the thing you have to do is to light a fire with newspaper each morning. It takes about a week (maybe less) and then they move on to other things."

Something else to try, at least.

Ugh, the same thing happened to us in January out here in Langley. A northern flicker decided to set up shop and peck on the side of our house for about two weeks. It was awful because it was pecking on the wood and made a small hole on the side of our house, near the roof. We spent two weeks spraying water at it and throwing rocks as soon as we heard the tapping. The persistence paid off though and it hasn't been back since (although now we've got to get a contractor to fix the hole).

Ever since then I've developed a deep hatred for those Woody Woodpecker cartoons.

Hey Derek, have you recorded his sounds? I would and try playing it back through a boom box close to where he is when he starts again. Just a thought. A pellet gun might help too. I don't mean to be mean but if your inclined.
Good Luck
Steven in Ohio

Try dressing like a woodpecker and peck on it yourself and retake your territory. Show him who's boss!

OMG, this happens to us way too much. Seems like almost once a month, we get a pair of Flickers that hammer away on our metal chimney. Always in the early morning and I have to go outside and yell like a fool to get them to fly away.

Sounds like we have a cross border problem, I live just south of you in Lacey, WA.

My parents in Canmore had the same problem and bought an "attack spider" from www.birds-away.com. Seemed to work.