Farewell to the Lab 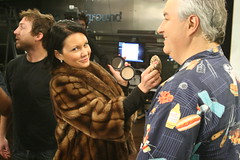 Back in February when my podcast co-host Paul and I made our most recent trip down to the Lab With Leo studios here in Vancouver, no one knew that it would be the last shooting week ever for the show. But not long afterwards, Leo Laporte emailed to tell us it was the end of the line: after ten years of creating Call for Help and The Lab for TV in the U.S. and Canada, it had been cancelled.

It's a pity that a tech show like The Lab, which covers a wide variety of topics and doesn't talk down to its audience, couldn't survive—or even get U.S. distribution. Fortunately, Leo (who has been covering technology on radio and TV for decades, and has even won an Emmy award) isn't standing still, and plans to launch an online version of the show in the next few weeks from his studio in Petaluma, California (also, incidentally, the town where Mesa-Boogie manufactures its guitar amplifiers).

As far as Inside Home Recording goes, we've started posting tutorials over at IHR TV, which may later include some live-action explanatory episodes like our segments on The Lab. And though it's far less convenient than driving a few minutes across Vancouver, if we ever find ourselves in California wine country, we might appear on Leo's new show down there too.

That's really too bad. It's a great show. Good to hear that he's continuing online. He has a really good fan base.