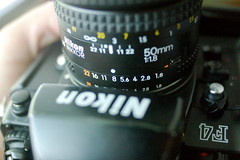 The aperture and f-stops article in my ongoing Camera Works series has been popular, but it has also raised some questions. Here's one from Mike S.:

How much ISO would I gain?

I just read your blog on f-stops. Very informative and I learned things I had given up on. I do have a question. Keep in mind I'm not mathematically inclined. I am trying to figure out how much ISO I would gain, meaning lower ISO, if I shot at a 1.8 setting versus a 2.8? I currently only own 2.8 lenses and find myself shooting indoor sports at ISO 3200 at about a 320th of a second. My goal is to get the ISO to 1600 or lower while keeping the 320 [shutter speed] as a minimum. How would I figure this out? I wasn’t sure if 2.8 was double 1.8.

(You won't see f/45 or f/64 on normal SLR or point-and-shoot lenses, but they're not uncommon on large-format cameras.)

Each of those values lets in half the light of the stop to the left, and twice the light of the stop to the right. So in Mike's case, using a lens that can open to f/2 instead of f/2.8 will let him use either twice the shutter speed or half the ISO (light sensitivity) setting. But what about f-stops that don't fit that sequence, like f/1.8 or f/3.3?

This takes simple real-world f-stop math, but it's just multiplying and dividing, so it's not hard. The old area-of-a-circle equation (πr2) gives you the answers:

What does that mean?

Here's how you can use that knowledge:

This reveals something. In the old days of film, photographers used to think in terms of two variables: shutter speed and aperture. That's because the third one, sensitivity or ISO (also known previously as ASA), was fixed for each roll of film. You had an ISO 400 roll, or an ISO 64 roll, or a high-speed ISO 1000 roll, but that was it until you changed the film.

In the digital age, we now have that third variable, because we can adjust the ISO as much as we want, or even have the camera adjust it automatically for changing lighting conditions, so that each picture can use its own ISO setting, as well as its own aperture and shutter speed. 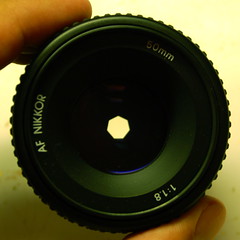 All right, so here is the simplified version of what to do when you want to know how two different f-stops affect ISO and shutter speed:

Divide the bigger f-stop number by the smaller one (2.8 divided by 1.8, for example) to get the ratio of their diameters. Then square the result to find out the ratio of light let through. Next, multiply or divide your shutter speed or ISO by that value to figure out how you need to adjust it.

Or let your camera's meter figure it out!

The nice part is that while you have to square the aperture ratios to determine how much light is let through, shutter speed and ISO simply multiply or divide by 2: 1/500 sec lets in half the light of 1/250, and ISO 3200 captures twice the light of ISO 1600, so the rest of the math is straightforward

When you spin the aperture dial on your camera and see intermediate values—or if you have a lens with a physical aperture ring with clicks in between the full-stop values and a maximum aperture not on that scale, like f/3.5, f/4.5, or f/6.3—now you know what those values represent.

One stop can be expensive

Modern digital cameras with good performance at high ISO sensitivity, and lenses with image stabilization, now make it possible to get similar results (one stop faster) for much, much less money.

An acquaintance here in Kyoto has one of the 300mm f/2 lenses... I was stunned when he showed up to photograph the preschool recital with it. When he moved from film to digital, he switched from Nikon to Canon, so every time I see him, I give him that "will you sell me your 300/2?????" look.

Whoops. My mistake. I'll fix that.