I wish I'd discovered Craig Ferguson five years ago 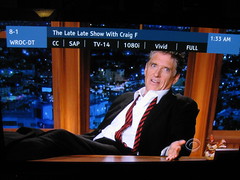 I've only occasionally stumbled on The Late Late Show With Craig Ferguson since he started hosting the program in 2005. It starts after 12:30 a.m., after all, and I'm not the night-owl musician I used to be. I always found him funny.

Since we got an HDTV and a PVR in January, we're not only easily able to record whatever shows we want, but we also have access to channels such as CBS Detroit that are on East Coast time—so Ferguson is on at a much more reasonable hour. I've been watching him pretty much every day.

That's because he's both extremely smart and entirely hilarious. I don't think I've ever laughed as much at any other late-night show, not Johnny Carson, not David Letterman, not Stephen Colbert or Jon Stewart. Interestingly, while The Late Late Show has a fairly traditional talk-show format, with a monologue and guests, Ferguson has no co-host/sidekick, and no band. And he's better for it.

He's also keen to disassemble how talk shows work, to change the format, to take humour out of awkward pauses and improvisations. (His 1000th episode last year was performed almost entirely by puppets.) It clicks completely with the kind of humour I like.

His memoir, American on Purpose, is also a great read as I recommended before. And you can follow him on Twitter. But he shines on late night, and you should watch him there. I wish I'd discovered his show five years ago.

Absolutely agree! He's the most original dude in late night, or early night for that matter. :)

When interviewing him, even Letterman looked perplexed as he asked him, "How do you DO what you do?"

i just started watching this week (although I've loved his standup album since it came out, and his character on the drew carey show). I agree. Wish I'd started awhile ago.

I think he's about the same funny for me as Jon Stewart, but I really dislike the Daily show segments where they go out and make fun of people (I love the correspondants when in studio, it's just those interviews that bug me.) So Ferguson's show is better overall than the Daily Show for that.

I really loved the Stephen Fry interview last night, that was brilliant, showed he could hold his own even in a long format interview (I would love to see him and John Stewart do an hour interview in same format, i think they'd be great talking about the media together.)

Hey... I notice it's just about that time right now. Thanks Derek - I'll go check it out before I hit the hay...

I agree but only see clips on the web or the show when in the USA. We get Letterman in New Zealand but, sadly, not Craig

BTW; If you haven't seen it already check out his movie "Saving Grace". Great Brit comedy

Agree - the guy is fun to watch.

And a Detroit reader of your blog says hi.